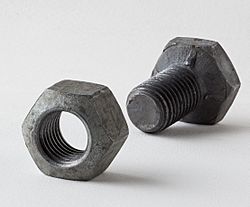 A nut and a bolt made to the same specifications by different manufacturers fit together perfectly.

Interchangeable parts is a basic concept of creating identical or nearly identical parts to be mass produced. These parts can then be put together to form a product. For example, cars, computers, furniture, almost all products used today, are made from interchangeable parts. These parts are made with precision machines so each part can fit in any product that uses this part. Since it is no longer necessary to make each part one at a time and by hand, assembling products takes fewer workers. This lowers the cost of the product. Interchangeability of parts also allows products to be repaired by replacing a broken part with an identical new part. Eli Whitney was the first to use interchangeable parts in manufacturing.

Several inventors have had the idea of interchangeable parts in the past. But their version of the idea revolved around parts that had very loose tolerances or were used only for very simple parts. In 1720 a Swedish inventor named Christopher Polhem used interchangeable parts for clocks in his workshop. But the idea was not used outside his shops.

About the middle of the 18th century, French gunsmith Honoré Blanc developed the concept of interchangeable parts for muskets. Blanc tried to interest other European gunsmiths, but they were not impressed by the idea. But he did interest the American Ambassador to France, Thomas Jefferson. Jefferson quickly saw that mass production of weapons parts would free America from dependence on European sources for parts. He could not get Blanc to move to the United States but he did convince President George Washington it was a good idea. It came at a critical time when Congress was preparing for a war with France. In 1798, Eli Whitney got the first contract for 10,000 muskets to be delivered within two years. Whitney used a large force of unskilled workers and machinery to produce standardized identical parts at a low cost. What he produced was the first smoothbore flintlock musket produced in the United States, the Springfield Model 1795 Musket. Whitney's idea of using machines to create interchangeable parts started what came to be known as the "American system" of mass production.

The concept of mass production depends on the use of interchangeable parts. One of the most famous inventors to use interchangeable parts, mass production and the assembly line was Henry Ford. Unlike other cars of the time, his Ford Model T used the same identical parts in each vehicle. Parts were created in large quantities and delivered to his assembly plant where workers built the cars on an assembly line. This allowed Ford to produce a quality vehicle ready to go in just 93 minutes. Ford raised workers' wages in 1914 to $5 a day. That was an excellent wage at the time, so much so that it allowed many of his workers to buy their own Model T. That same year Ford produced more cars than all other car manufacturers combined. His least expensive model in 1914, the Runabout, sold for $440. By 1925 he was able to sell a Model T for as little as $260.

All content from Kiddle encyclopedia articles (including the article images and facts) can be freely used under Attribution-ShareAlike license, unless stated otherwise. Cite this article:
Interchangeable parts Facts for Kids. Kiddle Encyclopedia.