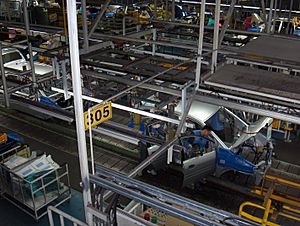 An assembly line for cars

If an item is produced in large quantities, this is usually called mass production. The item produced is called product, and it is usually made in a factory. The items produced will all be the same type. The process of making large quantities will usually require the use of standardized products or product groups. It also depends heavily on interchangeable parts.

Today, machines are often used to mass produce such items. Using division of labour, a greater number of items can be produced. Adam Smith used the example of a needle: With division of labour, it is possible to produce more needles in the same time. Frederick Winslow Taylor, the father of Taylorism also used the division of labour: he wanted to divide the tasks into planning tasks, and execution.

All content from Kiddle encyclopedia articles (including the article images and facts) can be freely used under Attribution-ShareAlike license, unless stated otherwise. Cite this article:
Mass production Facts for Kids. Kiddle Encyclopedia.