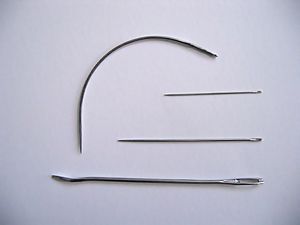 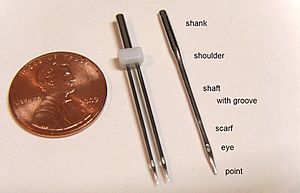 Sewing machine needles have the hole near the point.

A needle is a small tool used to push or pull a thread through a small hole. It is most often used to make clothing and footwear.

The needle consists of a short stick with a sharp point and hole for the thread. Needles are now mostly made of steel, but in ancient or Stone Age times they would have been made of small bones or twigs.

The term needle may also be used to refer to other sharp objects used for different purposes, such as the needles doctors use to give a shot.

All content from Kiddle encyclopedia articles (including the article images and facts) can be freely used under Attribution-ShareAlike license, unless stated otherwise. Cite this article:
Needle Facts for Kids. Kiddle Encyclopedia.