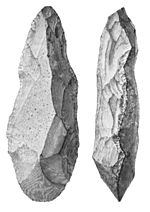 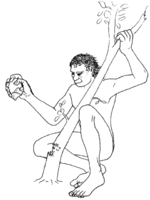 The Stone Age was a prehistoric time when people made tools from stone. Wood, bones, and other materials were also used for tools, but those things don't last as long, so more stone tools are found. Stone (especially a hard kind of stone called flint) was used to cut things.

The period began with the first stone tools, about 2.7 million years ago. Some groups of people were still in the stone age into the 20th century. They also killed animals for food and clothing. They used animal skin for their shelters.

The time after the Stone Age is the Bronze Age, named after the metal bronze. The Stone Age ended when people discovered the art of smelting (making metals). The first metal used was copper, followed by bronze. People probably began using bronze instead of just stone in the Middle East sometime between 3000 and 2000 BC.

The Palaeolithic is a prehistoric era distinguished by the development of stone tools. It covers the greatest portion of humanity's time (roughly 99% of human history) on Earth, from about 2.7 million years ago to about 20,000 years ago. It was followed by the Mesolithic and Neolithic cultures.

In 1859 Jens Jacob Worsaae first proposed a division of the Stone Age into older and younger parts based on his work with Danish kitchen middens that began in 1851. In the subsequent decades this simple distinction developed into the archaeological periods of today. The major subdivisions of the Three-age Stone Age cross two epoch boundaries on the geologic time scale:

All content from Kiddle encyclopedia articles (including the article images and facts) can be freely used under Attribution-ShareAlike license, unless stated otherwise. Cite this article:
Stone Age Facts for Kids. Kiddle Encyclopedia.