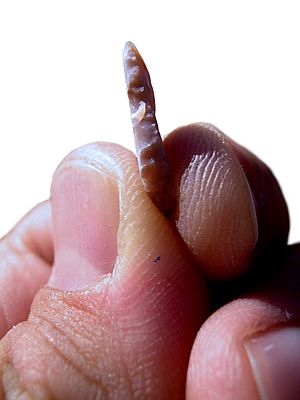 A microlith is a small stone tool usually made of flint or chert and typically a centimetre or so in length and half a centimetre wide. They were made by humans from around 35,000 to 3,000 years ago, across Europe, Africa, Asia and Australia. The microliths were used in spear points and arrowheads.

Microliths are produced from either a small blade (microblade) or a larger blade-like piece of flint by abrupt or truncated retouching, which leaves a very typical piece of waste, called a microburin. The microliths themselves are sufficiently worked so as to be distinguishable from workshop waste or accidents.

Regardless of type, microliths were used to form the points of hunting weapons, such as spears and (in later periods) arrows, and other artifacts and are found throughout Africa, Asia and Europe. They were utilised with wood, bone, resin and fiber to form a composite tool or weapon, and traces of wood to which microliths were attached have been found in Sweden, Denmark and England. An average of between six and eighteen microliths may often have been used in one spear or harpoon, but only one or two in an arrow.

All content from Kiddle encyclopedia articles (including the article images and facts) can be freely used under Attribution-ShareAlike license, unless stated otherwise. Cite this article:
Microlith Facts for Kids. Kiddle Encyclopedia.