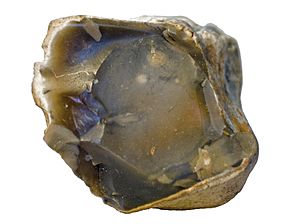 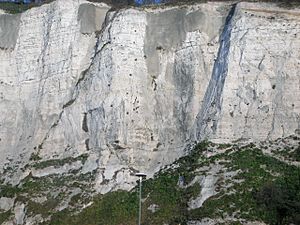 Chalk cliffs at Dover cliffs. The slanting dark lines in the chalk are flint. 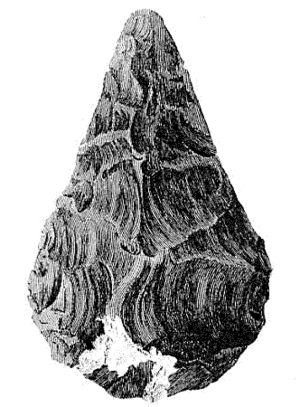 Flint handaxe from Hoxne, England. This is the first published picture of a handaxe in archaeological history. The handaxe was not a weapon; it was a tool used in butchering the carcasses of mammals.

Flint, or flintstone, is a kind of sedimentary rock, made of silica.

Bands of flint are found embedded in chalk and other kinds of soft limestone.

When the chalk is eroded, the hard flint nodules survive as pebbles on a shingle beach. It may happen that the pebbles later get cemented into another rock, such as a puddingstone. In this way, they make up a sedimentary rock for the second time.

Flint is a cryptocrystalline (means you can't see the crystals) form of the mineral quartz. It is a variety of chert. It occurs as a line of knobbly masses in chalk and some limestones. Inside the nodule, flint is usually translucent, and can be various colours. A thin layer on the outside of the nodules is usually different in colour, typically white and rough in texture.

Flintstones often have a rough lumpy surface but when they are broken, they look like dark glass. It has been one of the most useful types of stone to humankind.

When flintstones are broken, they have a sharp edge which could be used as a knife, or a scraper. When flint and an iron-containing material such as pyrite or steel are hit together, they can make a spark. For many centuries, flint was one of the main ways for people in many countries to make fire. People would carry a little box called a "tinder box" which had some tinder along with flint and pyrite or steel. The tinder was used to catch the spark and start a fire. Tinder could be sawdust, cloth, grass or bark. Flints were later used to make a spark to fire a gun. A gun that used flint was called a "flintlock" gun.

Flintstones are used in some countries for building. In England the flintstones used for building were often "knapped" which means they were broken to show the inside, like the stones used for the tower of Long Melford Church (below). This gave a better finish to the building that the dull knobbly stones would have made.

All content from Kiddle encyclopedia articles (including the article images and facts) can be freely used under Attribution-ShareAlike license, unless stated otherwise. Cite this article:
Flint Facts for Kids. Kiddle Encyclopedia.