Kids Encyclopedia Facts
This page is about the Roman fortification system. For other uses, see Saxon Shore (disambiguation). 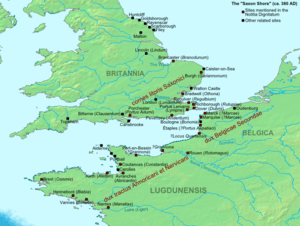 The fortifications and military commands of the Saxon Shore system extended on both sides of the Channel.

The Saxon Shore (Latin: litus Saxonicum) was a military command of the late Roman Empire, consisting of a series of fortifications on both sides of the English Channel. It was established in the late 3rd century and was led by the "Count of the Saxon Shore". In the late 4th century, his functions were limited to Britain, while the fortifications in Gaul were established as separate commands. Several Saxon Shore forts survive in east and south-east England. 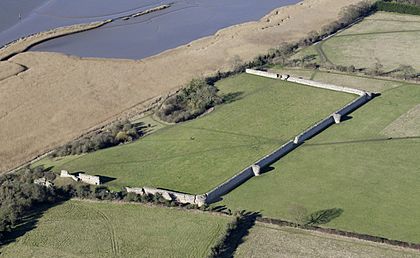 Burgh Castle in Norfolk, seen from the air.

During the latter half of the 3rd century, the Roman Empire faced a grave crisis. Internally, it was weakened by civil wars, the violent succession of brief emperors, and secession in the provinces, while externally it faced a new wave of attacks by barbarian tribes. Most of Britain had been part of the empire since the mid-1st century. It was protected from raids in the north by the Hadrianic and Antonine Walls, while a fleet of some size was also available.

However, as the frontiers came under increasing external pressure, fortifications were built throughout the Empire in order to protect cities and guard strategically important locations. It is in this context that the forts of the Saxon Shore were constructed. Already in the 230s, under Severus Alexander, several units had been withdrawn from the northern frontier and garrisoned at locations in the south, and had built new forts at Brancaster and Caister-on-Sea in Norfolk and Reculver in Kent. Dover was already fortified in the early 2nd century, and the other forts in this group were constructed in the period between the 270s and 290s. 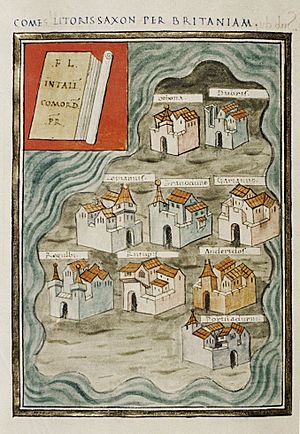 The nine forts mentioned in the Notitia Dignitatum for Britain are listed here, from north to south, with their garrisons.

There are a few other sites that clearly belonged to the system of the British branch of the Saxon Shore (the so-called "Wash-Solent limes"), although they are not included in the Notitia, such as the forts at Walton Castle, Suffolk, which has by now sunk into the sea due to erosion, and at Caister-on-Sea. In the south, Carisbrooke Castle on the Isle of Wight and Clausentum (Bitterne, in modern Southampton) are also regarded as westward extensions of the fortification chain. Other sites probably connected to the Saxon Shore system are the sunken fort at Skegness, and the remains of possible signal stations at Thornham in Norfolk, Corton in Suffolk and Hadleigh in Essex.

Further north on the coast, the precautions took the form of central depots at Lindum (Lincoln) and Malton with roads radiating to coastal signal stations. When an alert was relayed to the base, troops could be dispatched along the road. Further up the coast in North Yorkshire, a series of coastal watchtowers (at Huntcliff, Filey, Ravenscar, Goldsborough, and Scarborough) was constructed, linking the southern defences to the northern military zone of the Wall. Similar coastal fortifications are also found in Wales, at Cardiff and Caer Gybi. The only fort in this style in the northern military zone is Lancaster, Lancashire, built sometime in the mid-late 3rd century replacing an earlier fort and extramural community, which may reflect the extent of coastal protection on the north-west coast from invading tribes from Ireland.

The Notitia also includes two separate commands for the northern coast of Gaul, both of which belonged to the Saxon Shore system. However, when the list was compiled, in c. 420 AD, Britain had been abandoned by Roman forces. The first command controlled the shores of the province Belgica Secunda (roughly between the estuaries of the Scheldt and the Somme), under the dux Belgicae Secundae with headquarters at Portus Aepatiaci:

Although not mentioned in the Notitia, the port of Gesoriacum or Bononia (Boulogne-sur-Mer), which until 296 was the main base of the Classis Britannica, would also have come under the dux Belgicae Secundae.

To this group also belongs the Roman fort at Oudenburg.

Further west, under the dux tractus Armoricani et Nervicani, were mainly the coasts of Armorica, nowadays Normandy and Brittany. The Notitia lists the following sites:

In addition, there are several other sites where a Roman military presence has been suggested. At Alderney, the fort known as "The Nunnery" is known to date to Roman times, and the settlement at Longy Common has been cited as evidence of a Roman military establishment, though the archaeological evidence there is, at best, scant.

All content from Kiddle encyclopedia articles (including the article images and facts) can be freely used under Attribution-ShareAlike license, unless stated otherwise. Cite this article:
Saxon Shore Facts for Kids. Kiddle Encyclopedia.