Saint-Malo is a port city in Brittany, France. Its population is about 52,000. However, it can be nearly 200,000 in the summer with tourists. 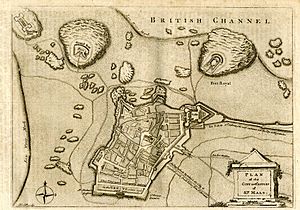 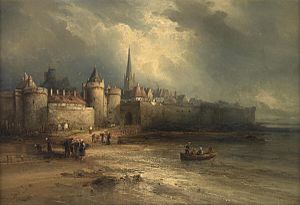 Founded by Gauls in the 1st century BC, the ancient town on the site of Saint-Malo was known as the Roman Reginca or Aletum. By the late 4th century AD, the Saint-Servan district was the site of a major Saxon Shore promontory fort that protected the Rance estuary from seaborne raiders from beyond the frontiers. According to the Notitia Dignitatum, the fort was garrisoned by the militum Martensium under a dux (commander) of the Tractus Armoricanus and Nervicanus section of the litus Saxonicum. During the decline of the Western Roman Empire, Armorica (modern-day Brittany) rebelled from Roman rule under the Bagaudae and in the 5th and 6th centuries received many Celtic Britons fleeing instability across the Channel. The modern Saint-Malo traces its origins to a monastic settlement founded by Saint Aaron and Saint Brendan early in the sixth century. Its name is derived from a man said to have been a follower of Brendan the Navigator, Saint Malo or Maclou, an immigrant from what is now Wales.

Saint-Malo is the setting of Marie de France's poem "Laüstic," an 11th-century love story. The city had a tradition of asserting its autonomy in dealings with the French authorities and even with the local Breton authorities. From 1590 to 1593, Saint-Malo declared itself to be an independent republic, taking the motto "not French, not Breton, but Malouin."

Saint-Malo became notorious as the home of the corsairs, French privateers and sometimes pirates. In the 19th century, this "piratical" notoriety was portrayed in Jean Richepin's play Le flibustier and in César Cui's eponymous opera. The corsairs of Saint-Malo not only forced English ships passing up the Channel to pay tribute but also brought wealth from further afield. Jacques Cartier, who sailed the Saint Lawrence River and visited the sites of Quebec City and Montreal and is thus credited as the discoverer of Canada, lived in and sailed from Saint-Malo.

Inhabitants of Saint-Malo are called Malouins in French. From this came the Spanish name for the Islas Malvinas, the archipelago known in English as the Falkland Islands. Islas Malvinas derives from the 1764 name Îles Malouines, given to the islands by French explorer Louis-Antoine de Bougainville. Bougainville, who founded the archipelago's first settlement, named the islands after the inhabitants of Saint-Malo, the point of departure for his ships and colonists.

In 1758, the Raid on Saint-Malo saw a British expedition land, intending to capture the town. However, the British made no attempt on Saint-Malo and instead occupied the nearby town of Saint-Servan, where they destroyed 30 privateers before departing.

In World War II, during fighting in late August and early September 1944, the historic walled city of Saint-Malo was almost totally destroyed by American shelling and bombing as well as British naval gunfire. The beaches of nearby Dinard had been heavily fortified against possible Allied commando raids. Artillery at the two locations provided mutual support. The fortification complex was garrisoned by more than twelve thousand German troops from different services and units as well as stragglers from other battles in the Cotentin. About eight thousand Germans were in Saint-Malo itself when the battle began.

Colonel Andreas von Aulock, the German commander, refused to surrender when asked to do so by the town’s authorities. He said he “would defend St. Malo to the last man even if the last man had to be himself.”

The first American attack was launched by the 83rd Infantry Division on 5 August 1944. German positions at Chateauneuf quickly fell. Cancale was abandoned and occupied by the Americans on the 6th. In the same way and on the same day, Dinan fell to Free French forces. The Germans shortened their lines and drew closer to the ancient citadel at St. Servan-sur-Mer, now reinforced with concrete.

Effective German artillery emplacements on the island of Cezembre were out of reach of American ground forces. German garrisons on the Channel Islands of Jersey, Guernsey, and Alderney were able to use small craft to bring in water and remove the wounded from the battle.

On 13 August, the walled city was on fire and a short truce was declared to allow French civilians to flee the city. Outlying German positions at St. Ideuc and La Varde fell to infantry attacks. This fighting ended resistance on the north shore of the peninsula. Only the citadel remained. Surrounded by American artillery and under frequent air attack, this last holdout surrendered on the afternoon of 17 August.

Cezembre surrendered on 2 September when the three-hundred-man garrison ran out of drinking water. The Americans had taken more than ten thousand prisoners during the two-week fight.

Saint-Malo was the site of an Anglo-French summit in 1998 that led to a significant agreement regarding European defence policy.

Saint-Malo has a terminal for ferry services with daily departures to Portsmouth operated by Brittany Ferries and services on most days Poole in England via the Channel Islands operated by Condor Ferries. It also has a railway station, Gare de Saint-Malo, offering direct TGV service to Rennes, Paris and several regional destinations. There is a bus service provided by Keolis. The town is served by the Dinard–Pleurtuit–Saint-Malo Airport around 5 kilometres (3 miles) to the south. 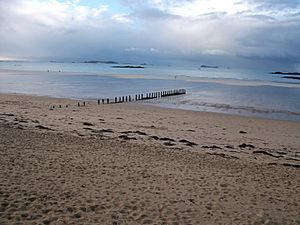 Beach at low tide in Saint-Malo 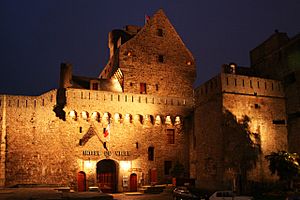 Now inseparably attached to the mainland, Saint-Malo is the most visited place in Brittany. Sites of interest include:

View of the walled city from the south-west

Panoramic view of the old walled city with bastion St. Philippe (left) and cathedrale St Vincent from the south

Panoramic view of La Cité, Cap-Hornier, les Corbières at the Quai Sébastopol from the south

Saint-Malo was the birthplace of:

All content from Kiddle encyclopedia articles (including the article images and facts) can be freely used under Attribution-ShareAlike license, unless stated otherwise. Cite this article:
Saint-Malo Facts for Kids. Kiddle Encyclopedia.