Port Louis is the capital city of the African country of Mauritius. The city is a port on the Indian Ocean. It is the largest city and main port of the country. Port Louis is located in the Port Louis District. The city has a population of 147,688 people.

Port Louis was founded by the French around 1735. It was used as a place to supply food for their ships travelling around the Cape of Good Hope. The city was named in honour of King Louis XV. The first Governor was Count Bertrand-François Mahé de La Bourdonnais. 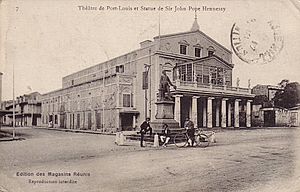 Port Louis has many historic and colonial buildings. One of them is a fortification named Fort Adelaide or La Citadelle. It was built by the British in 1835. Most of the city's architecture can be seen from La Citadelle. Port Louis is surrounded by a mountain range, called the Port Louis Moka Range. Other famous spots are the Police Barracks known as Les Casernes and the Port Louis Waterfront.

Other things to see in the city include the Caudan Waterfront, Port Louis Bazaar, the Mauritian Chinatown and the old Port Louis theatre. The capital has also three museums which are: the Mauritius Natural History Museum, the Blue Penny Museum and the Mauritius Stamp Museum.

The main part of the economy of Port Louis is its port. The port handles all of the international trade for the country. Clothing and textiles are the major things manufactured in the city. Chemicals, plastics, and pharmaceuticals are made there, and tourism is also important.

Port Louis is the second most important financial center in Africa after Johannesburg. It is the city with the highest per capita income in Africa. 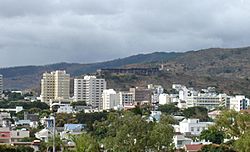 The Citadel of Port Louis.

The population of the city is now largely made up of the descendants of people who were hired for labor from India in the 19th century. Slaves were brought to the country by the British and French who colonized the island in the 18th century. After the end of slavery in 1835, many Indian and Chinese workers were brought to work the land, and take care of sugar cane, at that time used to make rum.

More than 75 percent of the population are Indians. The rest come from Africa, while a small number have Chinese and Eurasian ancestry.

All content from Kiddle encyclopedia articles (including the article images and facts) can be freely used under Attribution-ShareAlike license, unless stated otherwise. Cite this article:
Port Louis Facts for Kids. Kiddle Encyclopedia.