Pretoria is one of the three capital cities of the African country of South Africa. It is the executive (administrative) and de facto capital of the country. The other two capitals are Cape Town (legislative) and Bloemfontein (judicial). The city is in the northern part of Gauteng Province, South Africa.

Nguni-speaking settlers were probably the first people to live in the river valley that later became the location of the city of Pretoria.

During the First Boer War, the city was attacked in December 1880 and March 1881. The peace treaty which ended the war was signed in Pretoria on August 3, 1881 at the Pretoria Convention.

The Second Boer War (1899 to 1902) caused the end of the South African Republic. After this war, the United Kingdom took control of South Africa. During the war, Winston Churchill was imprisoned in the Staats Model School in Pretoria. He later got free and went to Mozambique. The city surrendered to British forces on June 5, 1900. The war ended in Pretoria with the signing of the Peace of Vereeniging on May 31 1902.

Pretoria was at one time seen as "the capital of Apartheid South Africa". This was changed when Nelson Mandela became the country's first black President.

Pretoria is situated approximately 55 km (34 mi) north-northeast of Johannesburg in the northeast of South Africa, in a transitional belt between the plateau of the Highveld to the south and the lower-lying Bushveld to the north. It lies at an altitude of about 1,339 m (4,393 ft) above sea level, in a warm, sheltered, fertile valley, surrounded by the hills of the Magaliesberg range. 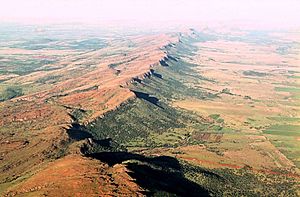 The City is surrounded by the Magaliesberg range

Pretoria has a humid subtropical climate (Köppen: Cwa) with long hot rainy summers and short cool to cold, dry winters. The city experiences the typical winters of South Africa with cold, clear nights and mild to moderately warm days. Although the average lows during winter are mild, it can get cold due to the clear skies, with nighttime low temperatures in recent years in the range of 2 to −5 °C (36 to 23 °F).

The average annual temperature is 18.7 °C (65.7 °F). This is rather high, considering the city's relatively high altitude of about 1,339 metres (4,393 feet), and is due mainly to its sheltered valley position, which acts as a heat trap and cuts it off from cool southerly and south-easterly air masses for much of the year.

Rain is chiefly concentrated in the summer months, with drought conditions prevailing over the winter months, when frosts may be sharp. Snowfall is an extremely rare event; snowflakes were spotted in 1959, 1968 and 2012 in the city, but the city has never experienced an accumulation in its history. 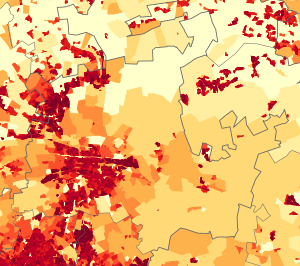 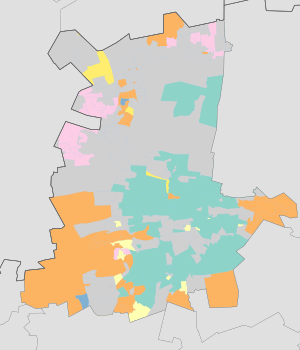 Depending on the extent of the area understood to constitute "Pretoria", the population ranges from 700,000 to 2.95 million. The main languages spoken in Pretoria are Sepedi, Sesotho, Setswana, Xitsonga, Afrikaans and English. The city of Pretoria has the largest white population in Sub-Saharan Africa. Since its founding, it has been a major Afrikaner population centre, and currently there are roughly 1 million Afrikaners living in or around the city.

Even since the end of Apartheid, Pretoria itself has had a white majority, albeit with an ever-increasing black middle-class. However, in the townships of Soshanguve and Atteridgeville black people make up close to all of the population. The largest white ethnic group are the Afrikaners and the largest black ethnic group are the Northern Sothos.

The lower estimate for the population of Pretoria includes largely former white-designated areas, and there is therefore a white majority. However, including the geographically separate townships increases Pretoria's population beyond a million and makes whites a minority.

Pretoria's Indians were ordered to move from Pretoria to Laudium on 6 June 1958.

Pretoria is known as the "Jacaranda City" due to the approximately 50,000 Jacarandas that line its streets. Purple is a colour often associated with the city and is often included on local council logos and services such as the A Re Yeng rapid bus system and the logo of the local Jacaranda FM radio station.

Pretoria has over the years had very diverse cultural influences and this is reflected in the architectural styles that can be found in the city. It ranges from 19th century Dutch, German and British colonial architecture to modern, postmodern, neomodern, and art deco architecture styles with a good mix of a uniquely South African style.

Some of the notable structures in Pretoria include the late 19th century Palace of Justice, the early 20th century Union Buildings, the post-war Voortrekker Monument, the diverse buildings dotting the main campuses of both the University of Pretoria and the University of South Africa, traditional Cape Dutch style Mahlamba Ndlopfu (the President's House), the more modern Reserve Bank of South Africa (office skyscraper) and the Telkom Lukasrand Tower. Other well-known structures and buildings include the Loftus Versfeld Stadium, The South African State Theatre and the Oliver Tambo building which is the Headquarters of the Department of International Relations and Cooperation. 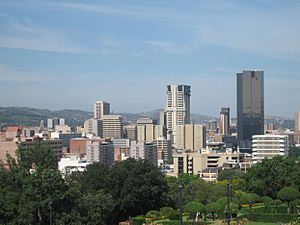 Despite the many corporate offices, small businesses, shops, and government departments that are situated in Pretoria's sprawling suburbs, its Central Business District still retains its status as the traditional centre of government and commerce. Many banks, businesses, large corporations, shops, shopping centres, and other businesses are situated in the city centre which is towered by several large skyscrapers, the tallest of which is the Poyntons Building (110 m or 360 ft tall), the ABSA Building (132 m or 433 ft tall) and the Reserve Bank of South Africa building (150 m or 490 ft tall).

The area contains a large amount of historical buildings, monuments, and museums that include the Pretoria City Hall, Pretorius Square, Church Square (along with its many historical buildings and statues), and the Ou Raadsaal. There is also the Transvaal Museum (the country's leading natural history museum, which although it has changed venues a number of times, has been around since 1892), the National Zoological Gardens of South Africa (or more colloquially known as the Pretoria Zoo), Melrose House Museum in Jacob Maré Street, the Pretoria Art Museum and the African Window Cultural History Museum.

Several National Departments also have Head Offices in the Central Business district such as the Department of Health, Basic Education, Transport, Higher Education and Training, Sport and Recreation, Justice and Constitutional Development, Public Service and Administration, Water and Environmental Affairs and the National Treasury. The district also has a high number of residential buildings which house people who primarily work in the district.

Pretoria is home to the National Zoological Gardens of South Africa, as well as the Pretoria National Botanical Garden. There are also a number of smaller parks and gardens located throughout the city, including the Austin Roberts Bird Sanctuary, Pretorius Square gardens, the Pretoria Rosarium, Church Square, Pretoria Showgrounds, Springbok Park, Freedom Park, and Burgers Park, the oldest park in the city and now a national monument. In the suburbs there are also several parks that are notable: Rietondale Park, "Die Proefplaas" in the Queenswood suburb, Magnolia Dell Park, Nelson Mandela Park and Mandela Park Peace Garden and Belgrave Square Park.

Pretoria is an important industrial centre. It has many industries including iron and steel as well as automobile, railroad and machinery manufacture.

All content from Kiddle encyclopedia articles (including the article images and facts) can be freely used under Attribution-ShareAlike license, unless stated otherwise. Cite this article:
Pretoria Facts for Kids. Kiddle Encyclopedia.