In South African, Namibian, Zambian, Botswanan, and Zimbabwean context, the term Coloured (Kleurlinge in Afrikaans) is used to refer to people of mixed European and Khoisan or Bantu ancestry.

They form the majority of the Northern Cape and Western Cape populations. Most Coloured speak Afrikaans as their first language, although there are some native English speakers. The majority of Coloureds living in Cape Town are able to speak both languages.

Because of South Africa's history of racial discrimination, many feel that the term coloured is derogatory. The official term is "Coloured people", but many Coloureds prefer to call themselves "Black", "Khoisan", or just "South African". 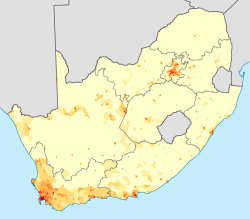 During apartheid, people were classified into four groups: White, Black, Coloured, and Asian. The Cape Malays, who are of Asian descent, were not classified as Asians, but as Coloureds.

Although they were discriminated upon by the government, many Coloureds and Asians got to enjoy certain rights during the apartheid era. For example, they did not have to carry around a passbook, had limited political representation, and were considered citizens of South Africa.

All content from Kiddle encyclopedia articles (including the article images and facts) can be freely used under Attribution-ShareAlike license, unless stated otherwise. Cite this article:
Coloured Facts for Kids. Kiddle Encyclopedia.