Amman is the capital and most populous city of Jordan, and the country's economic, political and cultural centre. Situated in north-central Jordan, Amman is the administrative center of the Amman Governorate.

Today, Amman is considered to be among the most liberal and westernized Arab cities. It is a major tourist destination in the region, particularly among Arab and European tourists.

The earliest evidence of settlement in the area is a Neolithic site known as 'Ain Ghazal. Previously it was known as "Rabbath Ammon", which was the capital of the Ammonites, then as "Philadelphia", and finally as Amman. It was initially built on seven hills but now spans over 19 hills combining 27 districts.

Approximately two million visitors arrived in Amman in 2014, which made it the 93rd most visited city in the world and the 5th most visited Arab city. 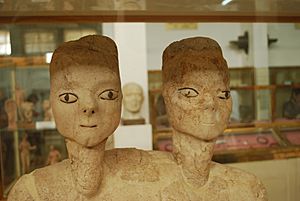 'Ain Ghazal Statues are considered to be one of the oldest human statues ever found, on display at The Jordan Museum - Dating back to 7250 BC.

Throughout history, Amman has been inhabited by several civilizations. The first civilization on record is during the Neolithic period, around 8500 BC, when archaeological discoveries in 'Ain Ghazal, located in eastern Amman, showed evidence of not only a settled life but also the growth of artistic work, which suggests that a well-developed civilization inhabited the city at that time.

In the 13th century BC Amman was called Rabbath Ammon or Rabat Amon by the Ammonites . It was later conquered by the Assyrians, followed by the Persians, and then the Greeks. Ptolemy II Philadelphus, the Hellenic ruler of Egypt, renamed it Philadelphia. The city became part of the Nabataean kingdom until AD 106 when Philadelphia came under Roman control and joined the Decapolis. 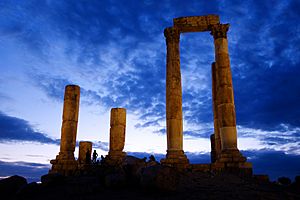 In 324 AD, Christianity became the religion of the empire. One of the churches of this period can be seen on the city's Citadel.

In 1921, Abdullah I chose Amman as seat of government for his newly-created state, the Emirate of Transjordan, and later as the capital of the Hashemite Kingdom of Jordan. Amman remained a small city until 1948, when the population expanded considerably due to an influx of Palestinian refugees from the occupied territories. Amman has experienced exceptionally rapid development since 1952 under the leadership of two Hashemite Kings, Hussein of Jordan and Abdullah II of Jordan. 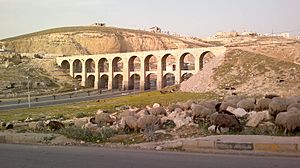 The city's population continues to expand at a fast pace (mainly by refugees escaping the wartime events in the occupied territories and Iraq). The city received refugees from these countries on a number of occasions.

The first group of Palestinian refugees arrived from the occupied territories in 1948, then again after the Six Day War in 1967. Palestinian and Jordanian and South East Asians, working as domestic servants, refugees arrived in Amman from Kuwait after the Gulf War of 1991, more also began arriving after the invasion and occupation of Iraq in 2003.

During the last ten years the city has experienced an economic, cultural and urban boom. The large growth in population has significantly increased the need for new accommodation, and new districts of the city were established at a quick pace. 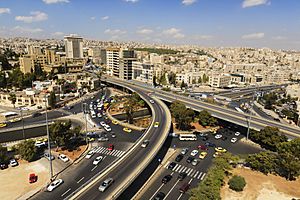 This strained Jordan's scarce water supply and exposed Amman to the dangers of quick expansion without careful municipal planning.

Today, Amman is known as a modern, liberal and westernized Arab city, with major mega projects such as the Abdali Urban Regeneration Project and the Jordan Gate Towers. 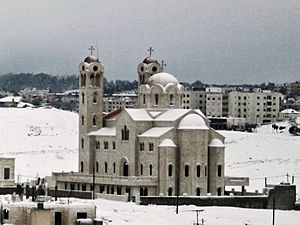 A Greek Orthodox church seen with snow in Amman

Amman is situated on the East Bank Plateau. Originally, the city had been built on seven hills. Amman's is noted for its mountains. The most important areas in the city are named after the hills or mountains they lie on. 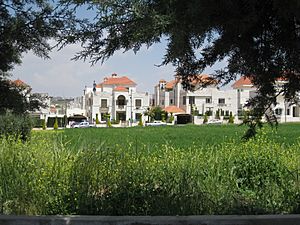 Spring in an affluent neighbourhood in the city

Amman's position on the mountains near the Mediterranean climate zone places it under the semi-arid climate classification.

Amman has extreme examples of microclimate, and almost every district exhibits its own weather.

It is known among locals that some boroughs such as the northern suburb of Abu Nser are among the coldest in the city, and can be experiencing frost while other warmer districts such as Marka can be providing much warmer temperatures to its inhabitants at the same time.

The banking sector is one of the principal foundations of Jordan's economy. Amman is the base city for the international Arab Bank, one of the largest financial institutions in the Middle East, serving clients in more than 600 branches in 30 countries on five continents. 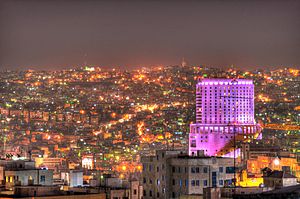 Amman is the 4th most visited Arab city and the ninth highest of international visitor spending. Roughly 1.8 million tourists visited Amman in 2011 and spent over $1.3 billion in the city. The expansion of Queen Alia International Airport is an example of the Greater Amman Municipality's heavy investment in the city's infrastructure.

The recent construction of a public transportation system and a national railway, and the expansion of roads, are intended to ease the traffic generated by the millions of annual visitors to the city.

Amman, and Jordan in general, is the Middle East's hub for medical tourism. Jordan receives the most medical tourists in the region and the fifth highest in the world. Amman receives 250,000 foreign patients a year and over $1 billion annually. 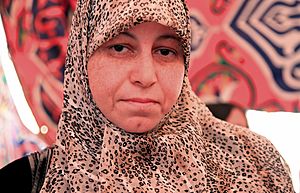 The population of Amman has risen exponentially with the successive waves of immigrants and refugees arriving throughout the 20th century. From a population of roughly 1,000 in 1890, Amman grew to around 1,000,000 inhabitants in 1990, primarily as a result of immigration, but also due to the high birthrate in the city.

Amman has a mostly Sunni Muslim population, and the city contains numerous mosques. Large numbers of Christians from throughout Jordan, , have moved to Amman.

Downtown Amman, the city centre area (known in Arabic as Al-Balad), has been dwarfed by the sprawling urban area that surrounds it. Despite the changes, much remains of its old character.

Residential buildings are limited to four stories above street level and if possible another four stories below, according to regulations. The buildings are covered with thick white limestone or sandstone. They usually have balconies on each floor, with the exception of the ground floor, which has a front and back yard.

Some buildings make use of Mangalore tiles on the roofs or on the roof of covered porches. Hotels, towers and commercial buildings are either covered by stone, plastic or glass.

A panoramic view of Amman International Stadium in the Sport City

Zahran district in west Amman is the location of the Jordan Gate Towers, the first high-rise towers in the city. It is a high-class commercial and residential project currently under construction, close to the 6th Circle. The towers are one of the best known skyscrapers in the city.

The southern tower will host a Hilton Hotel, while the northern tower will host offices. The towers are separated by a podium that is planned to become a mall. It also contains bars, swimming pools and conference halls. The developers are Bahrain's Gulf Finance House, the Kuwait Investment and Finance Company (KIFC). The project is expected to be opened by 2018. 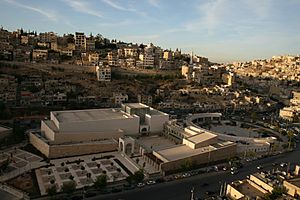 The Jordan Museum located near downtown

The largest museum in Jordan is The Jordan Museum. It contains much of the valuable archaeological findings in the country, including some of the Dead Sea Scrolls, the Neolithic limestone statues of 'Ain Ghazal, and a copy of the Mesha Stele.

Other museums include the Jordan National Gallery of Fine Arts, Jordan Archaeological Museum, The Children's Museum Jordan, The Martyrs' Memorial and Museum, the Royal Automobile Museum, the Prophet Mohammad Museum, the Museum of Parliamentary Life, the Jordan Folklore Museum, and museums at the University of Jordan. 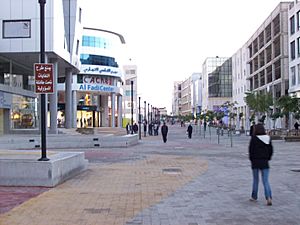 Wakalat Street ("Agencies Street") is Amman's first pedestrian-only street and carries a lot of name-label clothes. The Sweifieh area is considered to be the main shopping district of Amman. 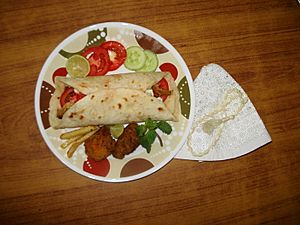 The city's culinary scene has changed from its shawerma stands and falafel joints to embrace many popular western restaurants and fast-food outlets such as Asian fusion restaurants, French bistros and Italian trattorias. The city has become famous for its fine dining scene among Western expatriates and Persian Gulf tourists.

Ammani cuisine as a product of several cuisines in the region, it combines the bright vegetables from Lebanon, crunchy falafels from Syria, juicy kebabs from Egypt and, most recently, spicy meat dishes from Jordan's neighbor, Iraq.

With the exception of a functioning railway system, Amman has a railway station as part of the Hejaz Railway. Amman has a developed public and private transportation system. There are two international airports in Amman. 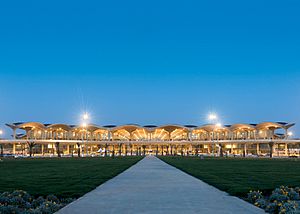 The main airport serving Amman is Queen Alia International Airport, situated about 30 km (18.64 mi) south of Amman. Much smaller is Amman Civil Airport, a one-terminal airport that serves primarily domestic and nearby international routes and the army.

Queen Alia International Airport is the major international airport in Jordan. Its expansion was recently completed and modified to handle over 16 million passengers annually, costing $700M. 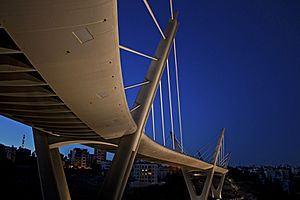 Amman has an extensive road network. Although the mountainous terrain of the area has prevented the connection of some main roads, which are instead connected by bridges and tunnels.

The Abdoun Bridge spans Wadi Abdoun, it is considered one of Amman's many landmarks and is the first curved suspended bridge to be built in the country, it connects the 4th Circle to Abdoun Circle. There are eight circles, or roundabouts, that span and connect west Amman. 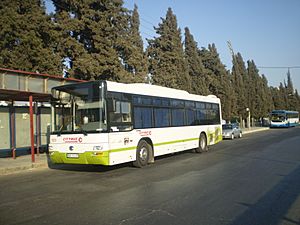 The city has frequent bus connections to other cities in Jordan, as well as to major cities in neighboring countries.

Internal transport is served by a number of bus routes and taxis. Service taxis, which most often operate on fixed routes, are readily available and inexpensive.

All content from Kiddle encyclopedia articles (including the article images and facts) can be freely used under Attribution-ShareAlike license, unless stated otherwise. Cite this article:
Amman Facts for Kids. Kiddle Encyclopedia.