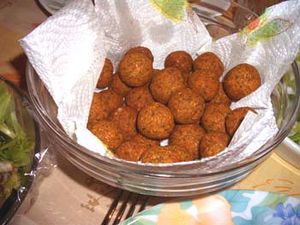 Falafel is a kind of vegetarian food. It is a deep-fried ball or patty made from ground chickpeas, fava beans, or both. Falafel is made from chickpeas or fava beans. Spices are added to these. Falafel is either made into a ball, or a disc, which is then fried. The dish originally came from Egypt. Today, it is a popular form of fast food in the Middle East, where it is also served as a mezze.

In Egyptian and Sudanese Arabic it is called طعمية Ta'amiyya.

The Arabic word "falafel" (falāfil) may be the plural of فلفل (filfil) 'pepper'. More relevantly, it is an adjective for fluffy/crunchy things, as in رز مفلفل (roz mfalfel), a kind of cooked rice, and شعر مفلفل (shar'r mfalfel), curly hair. Different spellings in English include felafel and filafil.

Falafel is usually served in a pita-like bread called lafa, either inside the bread, which acts as a pocket, or wrapped in a flat bread. In many countries falafel is a popular street food or fast food. The falafel balls, whole or crushed, may be topped with salads, pickled vegetables and hot sauce, and drizzled with tahini-based sauces. Falafel balls may also be eaten alone as a snack or served as part of a mezze. During Ramadan, they are sometimes eaten as part of an iftar, the meal which breaks the daily fast after sunset.

Falafel was originally made with fava beans. When the dish was used more to the north, chickpeas were more common, so they were used instead. The chickpea was used as a food item in the Levant before 4000 BC.

According to Ynetnews, "A common theory suggests falafel was invented some 1000 years ago by the Egyptian Copts. They took it with them when they moved to the rest of the Middle East. Another theory dates the invention of falafel as far as the 6th century AD, or even earlier, placing it on the subcontinent of India, which is known until today for making various chickpea-based dishes". 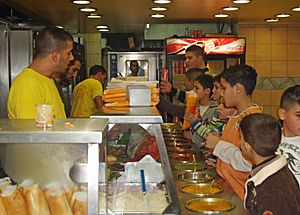 Falafel is made from fava beans or chickpeas or a combination of the two. In Egypt, fava beans are used exclusively. Other variations may contain only chickpeas. This is the case of Palestinians, Yemenite Jews in Jerusalem as well as in Syria and Lebanon. In the Levant, Falafel is generally made only with chickpeas. Unlike many other bean patties, in falafel the beans are not cooked before they are used. Instead they are soaked, possibly skinned, then ground, a small quantity of onions, parsley, spices (including cumin), and bicarbonate of soda are added. It is then deep fried at a high temperature. Sesame seeds may be added to the balls before they are fried; this is particularly common when falafel is served as a dish on its own rather than as a sandwich filling.

Recent culinary trends have seen the chickpea falafel have more success than fava bean falafel. Chickpea falafels are served across the Middle East, and have been popularized by expatriates of those countries living abroad. However, fava-bean falafel continue to predominate in Egypt and Sudan and their respective expatriate communities, and Egyptians are fond of deriding chickpea falafel as inferior.

In Israel small 2.5 cm spherical balls are made, while in Egypt and among Palestinians larger patties are shaped with a tablespoon or a special scoop with a lever to release them into the hot oil. 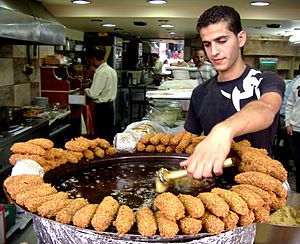 The kind of bread used for falafel may be different. Outside the Middle East, pita bread is often used as a pocket and stuffed with the different ingredients; in Arab countries a round khubz bread, 'eish' in Egypt, is halved, and the two resulting round pieces are used to create a cigar-shaped wrap. There, hummus (chickpeas pureed with tahini) is rarely used as a condiment, the usual sauce is tahini (sesame seed paste) thinned with water and lemon. The most common salad ingredients are tomato and parsley. In Lebanon, parsley is mixed with chopped mint leaves. It is also common in Syria and Lebanon to add pickles; the two canonical ones are pickled turnip, colored pink with beetroot, and pickled cucumber. Recently, there has been a new "filled" falafel, its center usually consisting of ground meat or minced onions or a boiled egg. These fillings are wrapped by the uncooked falafel mixture, and then deep fried.

The salads or the pita itself may be seasoned with salt or sumac, which is very commonly used in Syria; alternatively, these may be sprinkled on top.

Egyptian Falafel is made from Phaseolus vulgaris or fried Vicia faba grains.

Falafel made of bean beans with ground chickpeas and fried in a pretzel shape with a hole in the middle and coated with sesame.

All content from Kiddle encyclopedia articles (including the article images and facts) can be freely used under Attribution-ShareAlike license, unless stated otherwise. Cite this article:
Falafel Facts for Kids. Kiddle Encyclopedia.