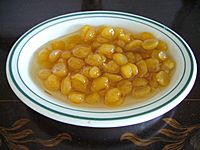 Chick Peas in a honey sauce, a Guatemalan dessert.

The chickpea (Cicer arietinum) is a yellow edible legume (bean). It can be used for cooking. The peas can be bought canned or dried. It was one of the earliest fruits to be grown. The first chickpea was grown in the Middle East about 7,500 years ago.

The most popular place for chickpeas to grow is in Pakistan. In 2008, nearly 6 million tonnes of chickpeas were produced there. Because the growth is so popular there, it is also known as the Indian pea.

Chickpeas contain a great deal of protein, zinc and folic acid. They can be an important part of a vegetarian or vegan diet, since they come from a plant.

A popular dish made from chickpeas is hummus.

All content from Kiddle encyclopedia articles (including the article images and facts) can be freely used under Attribution-ShareAlike license, unless stated otherwise. Cite this article:
Chickpea Facts for Kids. Kiddle Encyclopedia.