Guatemala is a country in Central America. It is known for its mixed culture, a product of both Mayan and Spanish cultures, from the colonial period. Guatemala is known for its ever-changing weather, a product of the mountain range which crosses the center of the country. Guatemala has many languages, a total of 23. Because of its natural beauty, it is a popular tourist destination.

The capital of Guatemala is Guatemala City. The country suffers from extreme poverty.

Guatemala is the world's largest producer and exporter of cardamom.

It is the country with the largest population in Central America. Its neighbors are the countries Belize, Mexico, El Salvador and Honduras. More than fourteen million people live in the 22 Guatemalan departments. Most of the population is made up of mestizo (mixed race) people, who are a combination of Native and European people. The population of the Mestizo people make up 42% of the population. The native Mayan people make up for 39% of the total population, while 20% are direct descendants of Spanish and German people. 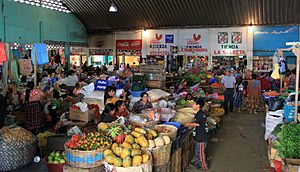 An indoor market in the regional city of Zunil. 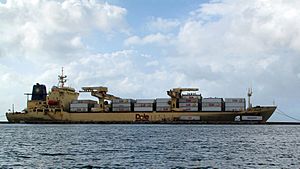 A ship picking up Guatemalan bananas for export.

Some of Guatemala's main exports are fruits, vegetables, flowers, handicrafts, cloths and others. In the face of a rising demand for biofuels, the country is growing and exporting an increasing amount of raw materials for biofuel production, especially sugar cane and palm oil. Critics say that this development leads to higher prices for staple foods like corn, a major ingredient in the Guatemalan diet. As a consequence of the subsidization of US American corn, Guatemala imports nearly half of its corn from the United States that is using 40 percent of its crop harvest for biofuel production. 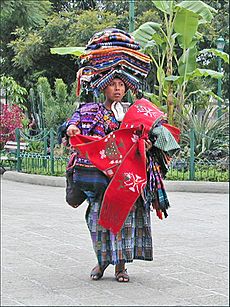 Guatemala City is home to many of the nation's libraries and museums, including the National Archives, the National Library, and the Museum of Archeology and Ethnology, which has an extensive collection of Maya artifacts. It also boasts private museums such as the Ixchel Museum of Indigenous Textiles and Clothing and the Museo Popol Vuh, which focuses on Maya archaeology. Both these museums are housed on the Universidad Francisco Marroquín campus. Most of the 329 municipalities in the country have at least a small museum. 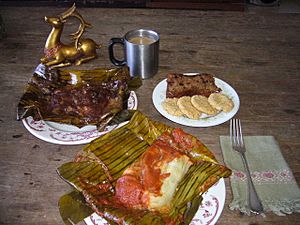 Black and red tamales in Guatemala

Guatemalan music comprises a number of styles and expressions. Guatemalan social change has been empowered by music such as nueva cancion, which blends together histories, present-day issues, and the political values and struggles of common people.

The Maya had an intense musical practice, as documented by their iconography. Guatemala was also one of the first regions in the New World to be introduced to European music, from 1524 on. Many composers from the Renaissance, baroque, classical, romantic, and contemporary music styles have contributed works of all genres.

The marimba is the national instrument; it has developed a large repertoire of very attractive pieces that have been popular for more than a century.

Many traditional foods in Guatemalan cuisine are based on Mayan cuisine and prominently feature maize, chilies and black beans as key ingredients. Traditional dishes also include a variety of stews including Kak'ik (Kak-ik), which is a tomato-based stew with turkey, pepian, and cocido. Guatemala is also known for its antojitos, which include small tamales called chuchitos, fried plantains, and tostadas with tomato sauce, guacamole or black beans.

Certain foods are also commonly eaten on certain days of the week; for example, a popular custom is to eat paches (a kind of tamale made from potatoes) on Thursday. Certain dishes are also associated with special occasions, such as fiambre for All Saints' Day on 1 November, or tamales and ponche (fruit punch), which are both very common around Christmas.

All content from Kiddle encyclopedia articles (including the article images and facts) can be freely used under Attribution-ShareAlike license, unless stated otherwise. Cite this article:
Guatemala Facts for Kids. Kiddle Encyclopedia.