Cardamom is the name used for two herbs related to ginger. Their seeds are used as a spice. The two species are named Elettaria and Amomum. The seeds grow in a small seedpod. This seedpod is triangular in cross-section and has the shape of a spindle. There is a thin papery outer shell and small black seeds. Elettaria pods are light green in color, Amomum pods are larger and dark brown.

Elettaria is commonly known as cardamom, green cardamom or true cardamom. It grows from India to Malaysia.

Amomum is usually called black cardamom, or white cardamom. It grows in Asia and Australia. 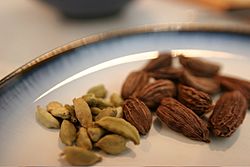 Both forms of cardamom are used to add flavor to both food and drink, as cooking spices and as a medicine. Elettaria cardamomum (the usual type of cardamom) is used as a spice and in medicine; it is also smoked sometimes; it is used as a food plant by the larva of the moth Endoclita hosei.

Cardamom has a strong taste and an intense smell. Black cardamom has coolness similar to that of mint. It is commonly used in Pakistani cooking. In Scandinavia it is often used for baking.

Green cardamom is one of the most expensive spices by weight but little is needed to give the flavor. Cardamom is best stored in pod form. Once the seeds are exposed or ground, they quickly lose their flavor. High-quality ground cardamom powder can often be a substitute for the pods. That way, ten pods is about the same quantity as one and a half teaspoons of ground cardamom.

In the Middle East, green cardamom powder is used as a spice for sweet dishes. Traditionally, it is also added as a flavoring to coffee and tea there. In Arabic, cardamom is called al-Hayl. In Persian, it is called hel. In Hebrew, it is also called hel (הל). In Gujarati (a derivative of Sanskrit), it is "Ē-lī-chē". In some Middle Eastern countries, coffee and cardamom are often ground in a wooden mortar and cooked together in a mihbaz, an oven using wood or gas, to produce mixtures that are as much as forty percent cardamom.

Black cardamom is sometimes used in garam masala for curries. It is occasionally used as a garnish in basmati rice and other dishes. It is often referred to as fat cardamom due its size ('Moti Elaichi'). Individual seeds are sometimes chewed, in much the same way as chewing-gum. It has also been known to be used to make gin. Cardamom was used to make the spiced wine, claret, in the Middle Ages.

In South Asia, Green cardamom is often used to treat infections of the teeth and gums. It is also used against troubles of the throat, congestion of the lungs and pulmonary tuberculosis, inflammation of eyelids and also digestive disorders. It has been used to break up kidney and gall stones, and as an antidote against the poison of certain snake bites.

Amomum is used as a spice and as an ingredient in traditional medicine in systems of the traditional Chinese medicine in China, in Ayurveda in India, Japan, Korea and Vietnam.

Among other species, varieties and cultivars, Amomum villosum cultivated in China, Laos and Vietnam is used in traditional Chinese medicine to treat stomach-aches, constipation, dysentery, and other digestion problems. "Tsaoko" cardamom Amomum tsao-ko is cultivated in Yunnan, China and northwest Vietnam, both for medicinal purposes and as a spice.

The demand for these herbs has increased since the 1980s. Growing cardamom has become an important source of income for many poor farmers. These people usually live in higher altitudes, sometimes in remote areas, in China, Laos and Vietnam.

All content from Kiddle encyclopedia articles (including the article images and facts) can be freely used under Attribution-ShareAlike license, unless stated otherwise. Cite this article:
Cardamom Facts for Kids. Kiddle Encyclopedia.