Each antidote only works for certain poisons.

Not every poison has an antidote. For example, the poison aconitine has no known antidote. Aconitine is a very poisonous toxin that comes from the Aconitum plant. If enough of the poison enters a person's body, the person often dies. 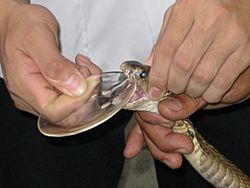 "Milking" a snake so antivenom can be made.

Antivenoms will fight the poisonous effects of bites from venomous animals (animals that make venom), like some snakes and spiders.

Sometimes, antidotes are poisons themselves. For example, atropine, which is found in deadly nightshade, is very poisonous. However, because of the way it reacts with the body, atropine is used as an antidote against some insecticides and certain kinds of nerve gas. Atropine is carried on many ambulances because it has other uses. For example, it can help restart a heart that is not beating.

There is a product called DuoDote that combines atropine with a medicine called pralidoxime chloride (also called 2-PAM). Both medicines are antidotes against some insecticides and nerve gases. DuoDote is given by injection (through a needle into the thigh muscle). It comes in an auto-injector, which looks like a large pen. When its safety cap is taken off and the auto-injector is pushed against the thigh, it will automatically send the needle into the thigh and deliver the medicines. DuoDote is not carried on many ambulances, but some special teams that specialize in treating poisons carry them.

Ethanol - drinking alcohol - can actually be used as an antidote. It works for people who have been poisoned by drinking ethylene glycol. Ethylene glycol is used in antifreeze. Because ethylene glycol tastes very sweet, children and animals sometimes drink a lot of it without realizing that it is poison.

Ethanol works as an antidote for ethylene glycol and methanol by sticking to those poisons. Once the ethanol is stuck onto the poisons, the kidneys urinate out the poisons.

A medicine called fomepizole is also an antidote for ethylene glycol and methanol poisoning. It works the same way as ethanol.

100% (pure) oxygen is an antidote for carbon monoxide poisoning. When pure oxygen is not enough, hyperbaric oxygen therapy (HBOT) can also be used.

Vitamin K is an antidote for warfarin (Coumadin) poisoning. Warfarin is a medicine which makes the blood thinner. It is used to prevent blood clots. However, if a person is given too much warfarin, their blood can get too thin. When the blood is too thin, it cannot clot. This can cause serious bleeding problems.

The blood needs vitamin K to be able to clot. When a person has warfarin poisoning, giving them vitamin K can make their blood able to clot again.

It takes vitamin K four to six hours to reverse warfarin poisoning. Because of this, if a person with warfarin poisoning is bleeding, doctors may also give fresh frozen plasma. This will work more quickly to make the blood less thin.

All content from Kiddle encyclopedia articles (including the article images and facts) can be freely used under Attribution-ShareAlike license, unless stated otherwise. Cite this article:
Antidote Facts for Kids. Kiddle Encyclopedia.