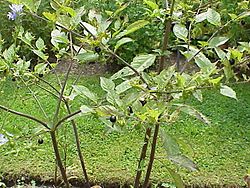 A shrub of the belladonna. 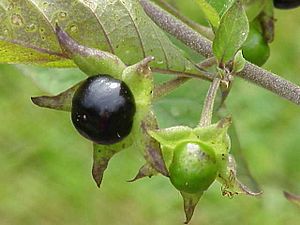 Berries of the belladonna.

Deadly nightshade or belladonna (Atropa belladonna) is a well-known, hardy perennial shrub. It is a member of the nightshade family.

Originally, it grew in Europe, North Africa and Asia. It has also been seen in North America, but is far less common there. Usually it grows in the shade. The plant does not like direct sunlight. Often it grows in places where the soil is rich in limestone.

Most parts of the plant are known to be very poisonous. Children have died from eating as little as three berries. One leaf contains enough poison to kill an adult. The root usually contains the most poison.

The poison present in the plant is called atropine.

Effects of the poison

The effects of Atropine are dilated (big) pupils, hallucinations, and difficulty in seeing (the vision may not be as sharp as always, it may be difficult to focus on some object). Problems keeping upright, feeling like one is flying, and being confused are also symptoms. The pulse of the victim grows faster and faster, and the rate at which the heart is beating will go up. Toxic reaction to atropine causes fever, delirium, stupor and rash on head, neck and upper trunk. There may be agitation, difficulty in speaking and swallowing. Coma and convulsions usually come before death.

All content from Kiddle encyclopedia articles (including the article images and facts) can be freely used under Attribution-ShareAlike license, unless stated otherwise. Cite this article:
Deadly nightshade Facts for Kids. Kiddle Encyclopedia.