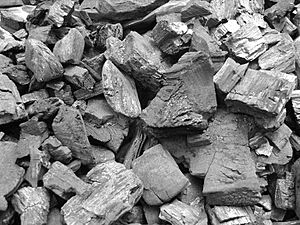 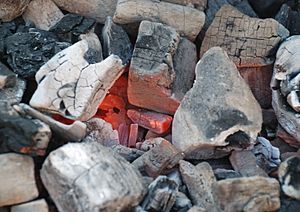 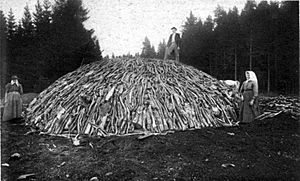 Wood pile before covering it with turf or soil, and firing it (around 1890)

Charcoal is a light black residue consisting of carbon, and any remaining ash, obtained by removing water and other volatile constituents from animal and vegetation substances. Charcoal is usually produced by slow pyrolysis, the heating of wood or other substances in the absence of oxygen (see pyrolysis, char and biochar). It is usually an impure form of carbon as it contains ash; however, sugar charcoal is among the purest forms of carbon readily available, particularly if it is not made by heating but by a dehydration reaction with sulfuric acid to minimise introducing new impurities, as impurities can be removed from the sugar in advance. The resulting soft, brittle, lightweight, black, porous material resembles coal. 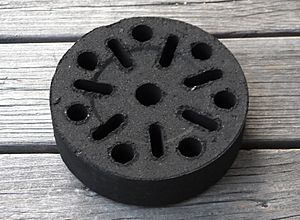 Charcoal has been used since earliest times for a large range of purposes including art and medicine, but by far its most important use has been as a metallurgical fuel. Charcoal is the traditional fuel of a blacksmith's forge and other applications where an intense heat is required. Charcoal was also used historically as a source of carbon black by grinding it up. In this form charcoal was important to early chemists and was a constituent of formulas for mixtures such as Black Powder. Due to its high surface area charcoal can be used as a filter, and as a catalyst or as an adsorbent.

Charcoal burns at intense temperatures, up to 2700 degrees Celsius. By comparison the melting point of iron is approximately 1200 to 1550 degrees Celsius. Due to its porosity it is sensitive to the flow of air and the heat generated can be moderated by controlling the air flow to the fire. For this reason charcoal is an ideal fuel for a forge and is still widely used by blacksmiths. Charcoal is also an excellent reducing fuel for the production of iron and has been used that way since Roman times. In the 16th century England had to pass laws to prevent the country from becoming completely denuded of trees due to production of iron. In the 19th century charcoal was largely replaced by coke, baked coal, in steel making due to cost. Charcoal is far superior fuel to coke, however, because it burns hotter and has no sulfur. Until World War II charcoal was still being used in Sweden to make ultra high-quality steel. In steel-making, charcoal is not only a fuel, but a source for the carbon in the steel according to some scholars such as Moronda, 2011.

After the 2009 United Nations Climate Change Conference (COP15) in Copenhagen, Denmark, the steel industry in Brazil proposed to replace coal and coke with charcoal in their high temperature furnaces. The program "Green Steel for the Brazilian Steel Industry" converted wood from Eucalyptus plantations into charcoal that will be used in steel making.

Historically, charcoal was used in great quantities for smelting iron in bloomeries and later blast furnaces and finery forges. This use was replaced by coke during the Industrial Revolution. For this purpose, charcoal in England was measured in dozens (or loads) consisting of 12 sacks or shems or seams, each of 8 bushels. In 2010, Japan Consulting Institute took an action in search of a better, 'greener', and even cheaper alternative to replace fossil fuels like coke in steelmaking. The research revealed that Palm Kernel Shell charcoal (PKS charcoal) is proven to be a better fuel in Electric arc furnace (EAF) as coke replacement. As auxiliary energy in EAF, in many aspects, PKS charcoal outperforms coke.

Prior to the industrial revolution charcoal was occasionally used as a cooking fuel. Modern "charcoal briquettes", widely used for outdoor grilling and barbecues in backyards and on camping trips, imitate this use, but are not pure charcoal. They are usually compacted mixtures of sawdust with additives like coal or coke and various binders.

Like many other sources of carbon, charcoal can be used for the production of various syngas compositions; i.e., various CO + H2 + CO2 + N2 mixtures. The syngas is typically used as fuel, including automotive propulsion, or as a chemical feedstock.

In times of scarce petroleum, automobiles and even buses have been converted to burn wood gas (a gas mixture consisting primarily of diluting atmospheric nitrogen, but also containing combustible gasses, mostly carbon monoxide) released by burning charcoal or wood in a wood gas generator. In 1931 Tang Zhongming developed an automobile powered by charcoal, and these cars were popular in China until the 1950s. In occupied France during World War II, wood and wood charcoal production for such vehicles (called gazogènes) increased from pre-war figures of approximately fifty thousand tons a year to almost half a million tons in 1943.

Charcoal (together with sulphur) is the fuel component of Black Powder and blasting powders and is also used in other pyrotechnic mixtures. This Charcoal is usually made from specific softwoods (ie- willow and grapevine) charred at low temperature.

Charcoal may be used as a source of carbon in chemical reactions. One example of this is the production of carbon disulphide through the reaction of sulphur vapours with hot charcoal. In that case the wood should be charred at high temperature to reduce the residual amounts of hydrogen and oxygen that lead to side reactions. 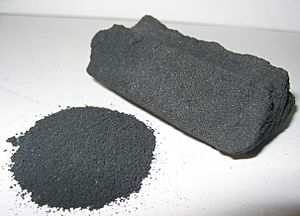 Charcoal may be activated to increase its effectiveness as a filter. Activated charcoal readily adsorbs a wide range of organic compounds dissolved or suspended in gases and liquids. In certain industrial processes, such as the purification of sucrose from cane sugar, impurities cause an undesirable color, which can be removed with activated charcoal. It is also used to absorb odors and toxins in gases, such as air. Charcoal filters are also used in some types of gas masks. The medical use of activated charcoal is mainly the adsorption of poisons. Activated charcoal is available without a prescription, so it is used for a variety of health-related applications. For example, it is often used to reduce discomfort (and embarrassment) due to excessive gas (commonly known as a fart or flatulence) in the digestive tract. 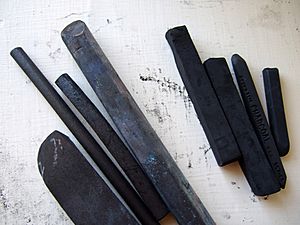 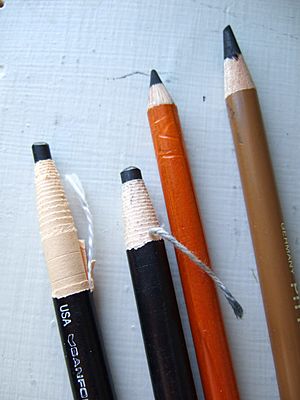 Charcoal is used in art for drawing, making rough sketches in painting and is one of the possible media for making a parsemage. It must usually be preserved by the application of a fixative. Artists generally utilize charcoal in three forms:

One additional use of charcoal was rediscovered recently in horticulture. Although American gardeners have been using charcoal for a short while, research on Terra preta soils in the Amazon has found the widespread use of biochar by pre-Columbian natives to turn unproductive soil into carbon rich soil. The technique may find modern application, both to improve soils and as a means of carbon sequestration.

Charcoal was consumed in the past as dietary supplement for gastric problems in the form of charcoal biscuits. Now it can be consumed in tablet, capsule or powder form, for digestive effects. Research regarding its effectiveness is controversial.

Red colobus monkeys in Africa have been observed eating charcoal for the purposes of self-medication. Their leafy diets contain high levels of cyanide, which may lead to indigestion. So they learned to consume charcoal, which absorbs the cyanide and relieves indigestion. This knowledge about supplementing their diet is transmitted from mother to infant.

Charcoal production at a sub-industrial level is one of the causes of deforestation in our world. Charcoal production is usually illegal and nearly always unregulated as in Brazil where charcoal production is actually a huge illegal industry for making pig iron. Massive forest destruction has been documented in areas such as Virunga National Park in the Democratic Republic of Congo, where it is considered a primary threat to the survival of the mountain gorillas. Similar threats are found in Zambia. In Malawi, illegal charcoal trade employs 92,800 workers and is the main source of heat and cooking fuel for 90 percent of the nation’s population. Some experts, such as Duncan MacQueen, Principal Researcher–Forest Team, International Institute for Environment and Development (IIED), argue that while illegal charcoal production causes deforestation, a regulated charcoal industry that required replanting and sustainable use of the forests "would give their people clean efficient energy – and their energy industries a strong competitive advantage."

All content from Kiddle encyclopedia articles (including the article images and facts) can be freely used under Attribution-ShareAlike license, unless stated otherwise. Cite this article:
Charcoal Facts for Kids. Kiddle Encyclopedia.