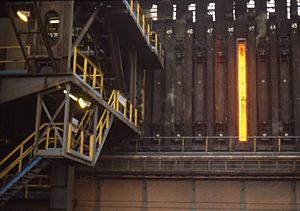 Coke is a fuel with few impurities and a high carbon content, usually made from coal. It is the solid carbonaceous material derived from destructive distillation of low-ash, low-sulfur bituminous coal. Cokes made from coal are grey, hard, and porous. While coke can be formed naturally, the commonly used form is man-made. The form known as petroleum coke, or pet coke, is derived from oil refinery coker units or other cracking processes.

Coke is used as a fuel and as a reducing agent in smelting iron ore in a blast furnace. The carbon monoxide produced by its combustion reduces iron oxide (hematite) to the iron product.

Although coke is more expensive than coal, it can be used in households as a clean fuel, relatively free of smoke and impurities. At the present day its use in domestic heating has been less than oil or gas, but in the 20th century it was often used in kitchen stoves.

Historical sources dating to the 4th century describe the production of coke in ancient China. The Chinese first used coke for heating and cooking no later than the ninth century. By the first decades of the eleventh century, Chinese iron workers in the Yellow River valley began to fuel their furnaces with coke, solving their fuel problem in that tree-sparse region. 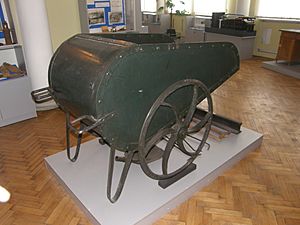 Museum of History of Donetsk metallurgical plant, wheelbarrow for coal or coke (fuel)

In 1709 Abraham Darby I established a coke-fired blast furnace to produce cast iron. Coke's superior crushing strength allowed blast furnaces to become taller and larger. The ensuing availability of inexpensive iron was one of the factors leading to the Industrial Revolution. Before this time, iron-making used large quantities of charcoal, produced by burning wood. As the cropping of forests became unable to meet the demand, the substitution of coke for charcoal became common in Great Britain, and the coke was manufactured by burning coal in heaps on the ground in such a way that only the outer layer burned, leaving the interior of the pile in a carbonized state. In the late 18th century, brick beehive ovens were developed, which allowed more control over the burning process. 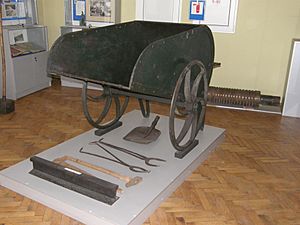 Museum of History of Donetsk metallurgical plant, wheelbarrow for coal or coke (fuel)

In the United States, the first use of coke in an iron furnace occurred around 1817 at Isaac Meason's Plumsock puddling furnace and rolling mill in Fayette County, Pennsylvania. In the late 19th century, the coalfields of western Pennsylvania provided a rich source of raw material for coking. In 1885, the Rochester and Pittsburgh Coal and Iron Company constructed the world's longest string of coke ovens in Walston, Pennsylvania, with 475 ovens over a length of 2 km (1.25 miles). Their output reached 22,000 tons per month. The Minersville Coke Ovens in Huntingdon County, Pennsylvania, were listed on the National Register of Historic Places in 1991. 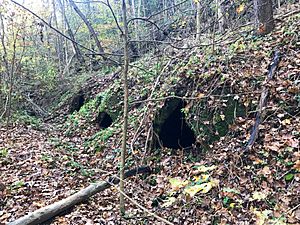 Coal was mined and transformed into coke in beehive ovens

Although it made a top-quality fuel, coking poisoned the surrounding landscape. After 1900, the serious environmental damage of beehive coking attracted national notice, even though the damage had plagued the district for decades. “The smoke and gas from some ovens destroy all vegetation around the small mining communities,” noted W. J. Lauck of the U.S. Immigration Commission in 1911. Passing through the region on train, University of Wisconsin president Charles van Hise saw “long rows of beehive ovens from which flame is bursting and dense clouds of smoke issuing, making the sky dark." 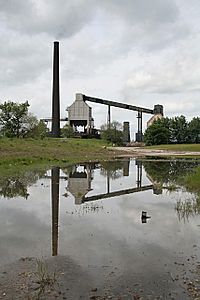 Bituminous coal must meet a set of criteria for use as coking coal, determined by particular coal assay techniques. These include moisture content, ash content, sulfur content, volatile content, tar, and plasticity. This blending is targeted at producing a coke of appropriate strength.

The greater the volatile matter in coal, the more by-product can be produced. It is generally considered that levels of 26–29% of volatile matter in the coal blend are good for coking purposes. Thus different types of coal are proportionally blended to reach acceptable levels of volatility before the coking process begins.

Coke is used as a fuel and as a reducing agent in smelting iron ore in a blast furnace. The carbon monoxide produced by its combustion reduces iron oxide (hematite) in the production of the iron product.

Coke is commonly used as fuel for blacksmithing.

Coke was used in Australia in the 1960s and early 1970s for house heating.

Since smoke-producing constituents are driven off during the coking of coal, coke forms a desirable fuel for stoves and furnaces in which conditions are not suitable for the complete burning of bituminous coal itself. Coke may be combusted producing little or no smoke, while bituminous coal would produce much smoke. Coke was widely used as a substitute for coal in domestic heating following the creation of smokeless zones in the United Kingdom.

Highland Park distillery in Orkney roasts malted barley for use in their Scotch whisky in kilns burning a mixture of coke and peat.

Wastewater from coking is highly toxic and carcinogenic. It contains phenolic, aromatic, heterocyclic, and polycyclic organics, and inorganics including cyanides, sulfides, ammonium and ammonia. Various methods for its treatment have been studied in recent years. The white rot fungus Phanerochaete chrysosporium can remove up to 80% of phenols from coking waste water.

All content from Kiddle encyclopedia articles (including the article images and facts) can be freely used under Attribution-ShareAlike license, unless stated otherwise. Cite this article:
Coke (fuel) Facts for Kids. Kiddle Encyclopedia.