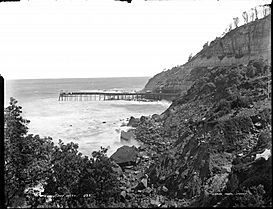 Coalcliff is a town on the coast of New South Wales, Australia, between Sydney and Wollongong.

In 1796 William Clark and others trekking north to Port Jackson from the wrecked ship Sydney Cove noticed coal exposed at the cliffs there and made a fire from it, attracting rescuers, giving the area its name. George Bass was despatched to report on it and traced the deposit along the shore and inland. There was nowhere for ships to safely land though, so it was not until 1850 that it began to be excavated.

In 1888 the Coalcliff General Store opened at 19 Paterson Road (once referred to as the 'main street') by Mr John Earle Gibbons and his wife, son and daughter-in-law of Matthew John Gibbons who arrived in Australia in 1790 as a convict on the Second Fleet, and was one of Coalcliff's earliest residents. Architecturally the store was of plain colonial style, constructed of local wood with a sandstone foundation. It sold, amongst other household items, Milk, Bread, Butter, Drinks, Meat, Stationary goods, Cigarettes and other tobacco paraphernalia, jams, preserves, poultry and bakery products. The shop was the major lifeforce behind the township until closure in 1907. The same year the shops was burned to the ground via unknown causes and remained a vacant lot until 1910 when another store was erected and opened by a Mr. L. Jameson. This is the building that still stands today at the corner on Paterson Road, which has been a private residential property since 1961.

The Jameson Store was the last running commercial outlet in Coalcliff, which ceased operation in May 1960 due to an overexpense of running costs and a severe lack of customers, with many of the towns-people opting to shop at nearby Stanwell Park, Helensburgh or south to Bulli and Woollongong. At the height of its popularity it served as a Milkbar, Fish & Chip shop, General Store, Tobacconist and even a small Bottle shop within its small boundaries. Its unsurpassable views meant it was a popular place for holidayers passing by.

The only evidence of this once thriving store are the fading advertisements painted to its side and roof.

The Sea Cliff Bridge surrounding the Coal Cliffs was opened on 11 December 2005 and offers a spectacular walkway and cycleway above the ocean and along the escarpment. There are splendid views offered towards Wollongong and Port Kembla in the south such as towards Bald Hill and the Royal National Park in the north.

Coalcliff hosts its own Surf Life Saving Club with events like Nippers in summertime and assuring beach safety. The Sea Eals winter swimming club takes place in the rock pool and is co-organized together with the Helensburgh-Stanwell Park Surf Life Saving Club such as the yearly 2.4 km Ocean Challenge swim between the two clubs in early April.

All content from Kiddle encyclopedia articles (including the article images and facts) can be freely used under Attribution-ShareAlike license, unless stated otherwise. Cite this article:
Coalcliff, New South Wales Facts for Kids. Kiddle Encyclopedia.