Fayette County is a county located in the U.S. state of Pennsylvania. Fayette County is located in southwestern Pennsylvania, adjacent to Maryland and West Virginia. As of the 2010 census, the population was 136,606. Its county seat is Uniontown. The county was created on September 26, 1783, from part of Westmoreland County and named after the Marquis de Lafayette.

The first Europeans in Fayette County were explorers, who had used an ancient American Indian trail that bisected the county on their journey across the Appalachian Mountains. In 1754, when control of the area was still in dispute between France and Great Britain (both disregarding the indigenous tribes who had long occupied the territory), 22-year-old George Washington fought against the French at Jumonville Glen and Fort Necessity. British forces under Washington and General Edward Braddock improved roads throughout the region, making the future Fayette County an important supply route.

During the American Revolution, Fayette County was plagued by attacks from British-allied Indians and remained isolated as a frontier region. Also retarding settlement was a border dispute with Virginia; Virginia's District of West Augusta and Pennsylvania's Westmoreland County both claimed the area. In 1780 the dispute was settled by the federal government in favor of Pennsylvania, and Fayette County was formed from Westmoreland County in 1783.

Fayette County settlers provided the new United States government with an early test of authority in the 1793 Whiskey Rebellion, when farmers rebelled against tax collectors to protest a new liquor tax. President George Washington called out the militias to restore order. Fayette County continued to be important to travelers in the early 1800s. The National Road provided a route through the mountains of the county for settlers heading west. The shipyards in Brownsville on the Monongahela River built ships for both the domestic and international trade.

As Pittsburgh developed its industries in the mid-19th century, Fayette County become a center of coal mining and coke production. From the 1880s to the early 1900s, the area's great expansion in steel production became nationally important, and labor unions shaped national policies. Both new European immigrants and African Americans in the Great Migration from the rural South were attracted to the Pittsburgh area for industrial jobs. The historic Scottish and German farming communities established in the earlier 19th century were soon overshadowed by the wave of immigrants from Southern and Eastern Europe. The region's wealth has been concentrated largely among the old English and Scottish families who had established businesses and political power in Pittsburgh prior to and in the advent of industrialization, often building the new manufacturing concerns, as did Andrew Carnegie.

By World War II, Fayette County had a new unionized working class that enjoyed increased prosperity. In the 1950s, however, the coal industry fell into decline. In the 1970s, the restructuring and collapse of American steel resulted in a massive loss of industrial jobs and hard times in the area. The population has declined since the peak in 1940, as residents have had to move elsewhere for work. The loss of union jobs caused many working families to drop out of the middle class. Only a few mines are being worked in the 21st century, but natural resources remain crucial to the local economy. The region is slowly transitioning toward the service sector, with an increase in jobs in fields such as telemarketing.

A study released in 2009 by PathWays PA, in partnership with the Pennsylvania Department of Labor and Industry, found that 35% of families in Fayette County were economically distressed, that is, failing to earn a wage that would adequately provide food, shelter, child care, health care, and other basic necessities.

While Fayette County is a generally rural area and is not directly tied into the interstate system, it features four-lane access to the city of Pittsburgh and several of its major suburban areas. State highway plans call for the establishment of direct freeway connections with Pittsburgh to the north and Morgantown, West Virginia to the south. 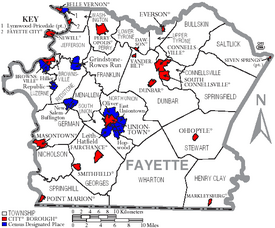 Under Pennsylvania law, there are four types of incorporated municipalities: cities, boroughs, townships, and, in at most two cases, towns. The following cities, boroughs and townships are located in Fayette County:

The population ranking of the following table is based on the 2010 census of Fayette County.

In 1967 Uniontown was the birthplace of the McDonald’s Big Mac sandwich.

Fayette County is also crisscrossed (both north-south and east-west) by several major gas transmission pipelines operated by Texas Eastern. Unlike other states, under Pennsylvania state tax policy, natural gas and oil pipelines are exempted from property taxes. Pipeline companies prohibit development within the 100-foot-wide right-of-way, thereby limiting future development options for the landowner. This limits future potential property tax revenues for the local taxing entities including the county, the boroughs and the school districts, by constraining future land development.

All content from Kiddle encyclopedia articles (including the article images and facts) can be freely used under Attribution-ShareAlike license, unless stated otherwise. Cite this article:
Fayette County, Pennsylvania Facts for Kids. Kiddle Encyclopedia.