Hopwood is a census-designated place (CDP) in Fayette County, Pennsylvania, United States. The population was 2,090 at the 2010 census, up from 2,006 at the 2000 census. It is located in North Union and South Union townships. The village was named after John Hopwood.

According to the United States Census Bureau, the Hopwood CDP has a total area of 1.89 square miles (4.89 km2), all of it land. The community sits at the western base of Chestnut Ridge, the westernmost ridge of the Allegheny Mountains in this area.

There were 893 households, out of which 23.7% had children under the age of 18 living with them, 52.6% were married couples living together, 9.7% had a female householder with no husband present, and 34.6% were non-families. 31.1% of all households were made up of individuals, and 14.4% had someone living alone who was 65 years of age or older. The average household size was 2.25 and the average family size was 2.81.

The Battle of Jumonville Glen, a skirmish which helped to start the French and Indian War, was fought near Hopwood on May 28, 1754.

Hopwood was home to the famous Uniontown Speedway from 1916 through the mid-1920s. The Universal Trophy and Autumn Classic, 1921 AAA Championship Car season national championship points races, were held there in 1921 and 1922. Before the sport was banned, In 1914 and 1915, hill-climb races were held up the nearby Summit Mountain. 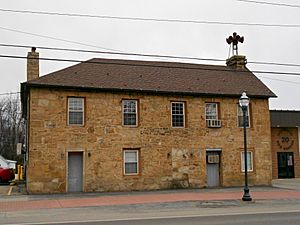 Hopwood has the most early-American 19th century stone buildings along the National Pike/Old U.S. Route 40, with a number of them being on the National Register of Historic Places. In 1816 President Monroe was a guest at the Hopwood-Miller Tavern, then known as the Moses Hopwood House. Other Presidents and notables stayed there when the building was operated as an inn including John Quincy Adams, William Henry Harrison, James Polk, James Buchanan. Other important buildings include the Barnes Estate, the Summit Inn, and the former Soldiers Orphan's School, a post-Civil War orphan school which is the current property of the Jumonville Training Center.

All content from Kiddle encyclopedia articles (including the article images and facts) can be freely used under Attribution-ShareAlike license, unless stated otherwise. Cite this article:
Hopwood, Pennsylvania Facts for Kids. Kiddle Encyclopedia.