Kids Encyclopedia Facts
This page is about the Pennsylvania city. For other uses, see Washington, Pennsylvania (disambiguation).

Washington is a city in and the county seat of Washington County, Pennsylvania, United States, within the Pittsburgh, PA Metropolitan Statistical Area in the southwestern part of the state. The population was 13,663 at the 2010 census.

According to the United States Census Bureau, Washington has a total area of 3.3 square miles (8.5 km2), all land. 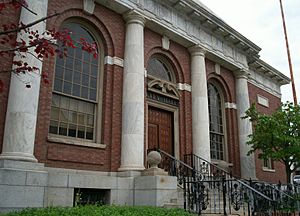 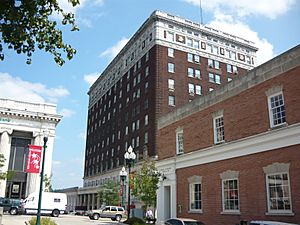 Delaware Indian chief Tangooqua, commonly known as "Catfish", had a camp on a branch of Chartiers Creek, in what is now part of the city of Washington. The French labeled the area "Wissameking", meaning "catfish place", as early as 1757. The area of Washington was settled by many immigrants from Scotland and the north of Ireland along with settlers from eastern and central parts of colonial Virginia. It was first settled by colonists around 1768.

The Pennsylvania General Assembly passed an act on March 28, 1781, erecting the County of Washington and naming "Catfish Camp" as the place for holding the first election. This was the first county in the U.S. to be named in honor of General George Washington. David Hoge laid out a plan of lots immediately after the legislature's action. His original plot carried the name "Bassett, alias Dandridge Town," but before the plot was recorded, lines were drawn through "Bassett, alias Dandridge Town" with ink, and the word "Washington" was written above. There have long been rumors among locals that the town was named “Washington” because George Washington spent the night in the region once. This is not true however; Washington had never been to the area.

The original plot dedicated a tract of ground to the people for recreational purposes. A lot was given for a courthouse where the current building now stands, and Lots 43 and 102, according to the plan, were presented by Hoge to "His Excellency, General Washington, and Mrs. Washington."

Washington, Pennsylvania, was the center for the 'Whiskey Rebellion' of 1791, which was one of the first open rebellions against the new U.S. government and Constitution. The rebellion was centered on a tax being imposed on whiskey distillation in the region. The house of David Bradford, one of the leaders of the rebellion, is now a museum devoted to the Whiskey Rebellion, the David Bradford House, located on South Main Street of the city.

In August 1875, construction began of the 3 ft (914 mm) Waynesburg and Washington Railroad, conceived by John Day in 1874 and chartered in 1875. Passenger services ended in 1929, conversion to standard gauge followed in 1944, when it was renamed the Waynesburg Secondary. Freight services ended in 1976, although part of the line still survives for access to a coal mine.

The discovery of oil and natural gas among the Washington oil field caused a boom period from the 1800s to the early 1900s.

James B. Wilson chartered the Washington Electric Street Railways in 1889 with construction beginning in November 1890. The first line was built from the Waynesburg and Washington Narrow Gauge station to Wilson Orchard, just north of the present day site of the Washington Hospital.

In 1903 the Washington and Canonsburg Railway Company linked the two towns with a trolley line. The company was bought by the Philadelphia Company in 1906, later becoming part of the Pittsburgh Railway Company, linking through to Pittsburgh as part of their interurban service in 1909. The line closed on August 29, 1953. A short section of the line and a number of trolley cars are preserved at the Pennsylvania Trolley Museum north of the city.

There are 6,259 households out of which 24.3% have children under the age of 18 living with them, 34.7% were married couples living together, 17.1% had a female householder with no husband present, and 44.3% were non-families. 38.0% of all households were made up of individuals and 15.8% had someone living alone who was 65 years of age or older. The average household size was 2.20 and the average family size was 2.91. 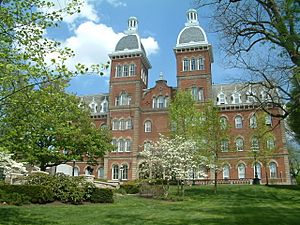 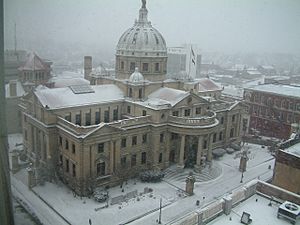 Washington is home to Washington & Jefferson College, a small, co-educational private liberal arts college founded in 1781. Located in downtown Washington, the college now enrolls over 1,500 students. It is noted as an excellent pre-med and pre-law institution due to its fine liberal arts curriculum and is considered a good preparatory school for graduate level studies in general. W&J’s 60-acre (240,000 m2) suburban campus includes more than 40 academic, recreational, and residential buildings, as well as a 54-acre (220,000 m2) biological field station. In the 2006 U.S. News and World Report "America's Best Colleges" guide, W&J was ranked #94 among the top 100 Liberal Arts Schools in the US.

Also in the city are two historic homes, that of David Bradford on Main St. and that of F. Julius LeMoyne on Maiden Street. Bradford's home was later the birthplace of American realist author Rebecca Harding Davis in 1831. LeMoyne was an ardent abolitionist whose home was part of the Underground Railroad; LeMoyne was a doctor who also built the first crematory in America. The David Bradford House and F. Julius LeMoyne House are listed on the National Register of Historic Places, along with the Administration Building, Washington and Jefferson College, Dr. Joseph Maurer House, Pennsylvania Railroad Freight Station, Washington Armory, Washington County Courthouse, and Washington County Jail.

Founded in 1891, Beth Israel Congregation is the only synagogue in Washington County. Immaculate Conception Church is a large Catholic church which serves the community and has a long history.

On January 27, 2006, to commemorate the Pittsburgh Steelers' appearance in Super Bowl XL, the city council voted to symbolically rename the city "Steelers, Pennsylvania" through February 5, 2006.

Washington Symphony Orchestra, founded 2002, offers four to five concerts annually. The Washington Community Theatre presents several musicals and other productions throughout the year, with a feature production held each June in the Main Pavilion at Washington Park. WCT celebrated its 40th anniversary in 2009.

All content from Kiddle encyclopedia articles (including the article images and facts) can be freely used under Attribution-ShareAlike license, unless stated otherwise. Cite this article:
Washington, Pennsylvania Facts for Kids. Kiddle Encyclopedia.