The First Sino-Japanese War (Chinese: 中日甲午戰爭, Japanese: 日清戦争; 1 August 1894–17 April 1895) was a war between the Qing Dynasty and the Empire of Japan. Finally, the Empire of Japan won the war. They signed the Treaty of Shimonoseki in 1895.

Comparison of the Military Power 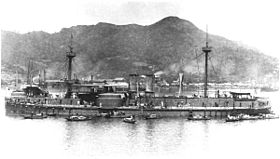 Zhenyuan, the strongest battleship in the Beiyang Fleet

There were totally 65 warships in China before the outbreak of the First Sino-Japanese War. They were divided into four fleets (Beiyang Fleet, the Nanyang Fleet, the Guangdong Fleet and the Fujian Fleet). However, the Beiyang Fleet was the only fleet participated in the war. In order to save their ships, the other fleets' commanders were opposed to join the war.

In the Beiyang Fleet, there were 25 warships. Dingyuan and Zhenyuan were the most powerful warships in the fleet. Dingyuan had 6,000 horsepower and displaced 7,670 tons loaded. Nevertheless, as Empress Dowager Cixi wanted to build a grand garden she embezzled the money originally allocated for expanding the Beiyang Fleet, the commanders did not have enough money to buy the latest weapons for the fleet. Most of the warships in the fleet were not well equipped before joining the war.

There were totally 240,616 soldiers could be mobilized in Japan before the outbreak of the war. Also, there were 32 battleships and 24 torpedo boats in the Imperial Japanese Navy. All of them had the latest, and newest weapons.

Main Battles During the War 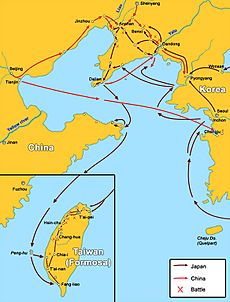 1. Battle of the Yalu River

On 17 September 1894, the Japanese armies occupied the fortresses with powerful cannons and cities in Lushun and Dalian. The Japanese troops entered the cities and killed 20,000 Chinese civilians within 4 days. This incident was historically called Port Arthur massacre.

In January 1895, the Japanese armies invaded Weihaiwei. The Beiyang Fleet was fairly defeated. 11 battleships of the team was seized.

All content from Kiddle encyclopedia articles (including the article images and facts) can be freely used under Attribution-ShareAlike license, unless stated otherwise. Cite this article:
First Sino-Japanese War Facts for Kids. Kiddle Encyclopedia.