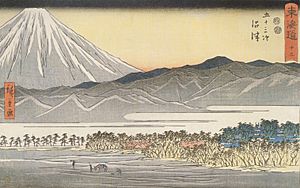 View of Mount Fuji, part of the Fifty-three Stations of the Tōkaidō series by Hiroshige, published 1850

Ukiyo-e (浮世絵), "pictures of the floating world", is a genre of Japanese woodblock prints. They were produced between the 17th and the 20th centuries, that showed landscapes, tales from history and the theatre. It is the main artistic genre of woodblock printing in Japan.

Ukiyo-e were cheap because they could be mass-produced. They were meant for mainly townsmen, who were generally not rich enough to pay an original painting. The original subject of ukiyo-e was city life, in particular activities and scenes from the entertainment district. To this day, Ukiyo-e is still very popular across the world.

A novelist of the time period, Asai Ryōi, in his Ukiyo monogatari (浮世物語, "Tales of the Floating World", c. 1661), gives an insight into the idea of the floating world:

"Living only for the moment, turning our full attention to the pleasures of the moon, the snow, the cherry blossoms and the maple leaves; singing songs, drinking wine, diverting ourselves in just floating, floating; ... refusing to be disheartened, like a gourd floating along with the river current: this is what we call the floating world".

All content from Kiddle encyclopedia articles (including the article images and facts) can be freely used under Attribution-ShareAlike license, unless stated otherwise. Cite this article:
Ukiyo-e Facts for Kids. Kiddle Encyclopedia.