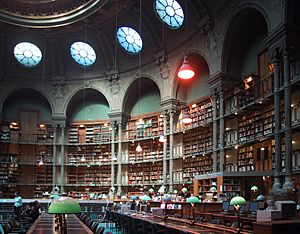 The oval reading room at the Bibliothèque nationale de France

The Bibliothèque nationale de France is the National Library of France in Paris.

The National Library of France was founded at the Louvre by Charles V in 1368. It grew under Louis XIV and opened to the public in 1692.

Following a series of regime changes in France, it became the Imperial National Library and in 1868 it moved to new buildings on the Rue de Richelieu. In 1896, the library was the largest collection of books in the world.

The library has 5,000 Greek manuscripts and the Jikji (the oldest printed document with movable type).

All content from Kiddle encyclopedia articles (including the article images and facts) can be freely used under Attribution-ShareAlike license, unless stated otherwise. Cite this article:
Bibliothèque nationale de France Facts for Kids. Kiddle Encyclopedia.