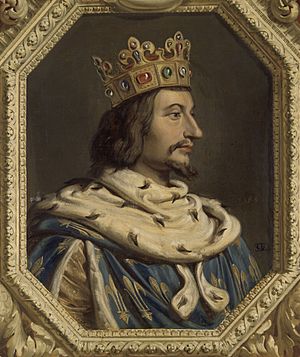 Charles V (21 January 1338 – 16 September 1380), called the Wise, was the King of France from 1364 to his death and a member of the House of Valois. He was born in Vincennes, the son of King John II of France and Bona of Luxembourg. After his father was captured by the English at the Battle of Poitiers (1356), Charles acted as the ruler of France. His reign marked a high point for France during the Hundred Years' War. His armies recovered large parts of the territory that had been given to England at the Treaty of Brétigny.

All content from Kiddle encyclopedia articles (including the article images and facts) can be freely used under Attribution-ShareAlike license, unless stated otherwise. Cite this article:
Charles V of France Facts for Kids. Kiddle Encyclopedia.