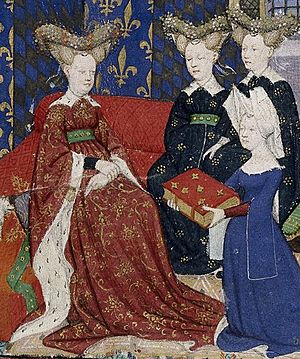 Christine de Pizan, sometimes known as de Pisan, (Venice 1364 – about 1430) was an Italian French late mediaeval author. She spent most of her childhood and all of her adult life in Paris and then the abbey at Poissy. She wrote only in her adopted language, Middle French. She challenged the male-dominated realm of the arts. She is known as Europe’s first professional woman writer.

She wrote both poetry and prose works. There were biographies and books of practical advice for women. She wrote 41 works in her 30-year career from 1399–1429. She married in 1380 at the age of 15, and was widowed 10 years later.

Her influence spread through all of Europe. It affected the social life of many Europeans because she gave confidence to women that they could rise beyond what men told them to do. Some scholars think this is misreading her intentions.

All content from Kiddle encyclopedia articles (including the article images and facts) can be freely used under Attribution-ShareAlike license, unless stated otherwise. Cite this article:
Christine de Pizan Facts for Kids. Kiddle Encyclopedia.