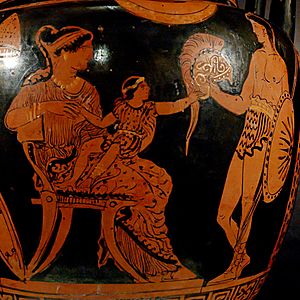 Hector's last visit with his wife, Andromache, and infant son Astyanax, startled by his father's helmet (Apulian red-figure vase, 370–360 BC)

Hector is a person in Greek mythology. He is an important person in the Trojan War, and Homer's Iliad.

Hector was the favourite son of King Priam of Troy and his wife Hecuba. He was married to Andromache, and had a son named Astyanax.

In the Trojan War he was the leader of the Trojans in battle and their hero. Hector was killed by Achilles. Also he was wounded badly by Ajax a Greek hero because Ajax threw a rock at him.

All content from Kiddle encyclopedia articles (including the article images and facts) can be freely used under Attribution-ShareAlike license, unless stated otherwise. Cite this article:
Hector Facts for Kids. Kiddle Encyclopedia.