Ajax the Great facts for kids 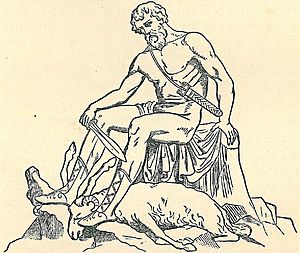 Ajax the Great or Aias (ancient Greek: Αἴας) son of Telamon, was a well-known hero from the Trojan War. He was the cousin of Achilles. Ajax died by committing suicide. This happened after Achilles died and he was in a contest with Odysseus to see who would receive Achilles's armour: he lost.

All content from Kiddle encyclopedia articles (including the article images and facts) can be freely used under Attribution-ShareAlike license, unless stated otherwise. Cite this article:
Ajax the Great Facts for Kids. Kiddle Encyclopedia.