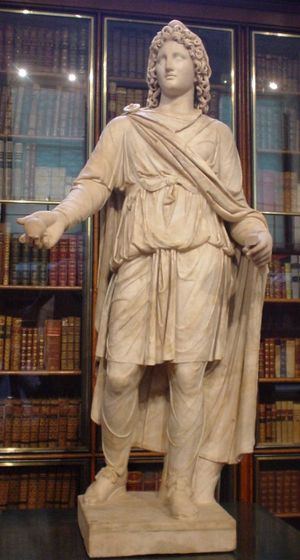 Paris, also called Alexandros, is a person in Greek mythology. He is an important person in the Trojan War, and Homer's Iliad.

Alexandros (Paris) was the son of King Priam of Troy and his wife Hecuba. Because it was prophesied that he would bring the end and destruction of Troy, he was left to die in the wilderness. But Alexandros was found by another man, who took him as a son and named him Paris.

Aphrodite promised him the most beautiful woman, Helen, who was already married to Menelaus. Paris used a trick to take her with him to Troy, which was the reason for the Trojan War.

Paris killed Achilles by shooting his heel with a poisoned arrow. Late in the Trojan War, Paris was killed by Philoctetes.

All content from Kiddle encyclopedia articles (including the article images and facts) can be freely used under Attribution-ShareAlike license, unless stated otherwise. Cite this article:
Paris (mythology) Facts for Kids. Kiddle Encyclopedia.