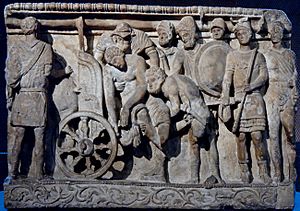 Menelaus and Meriones lifting Patroclus' corpse on a cart while Odysseus looks on; alabaster urn, Etruscan artwork from Volterra, 2nd century BC

Menelaos (or Latin Menelaus) was a person in Greek mythology. He was the son of King Atreus of Mycenae and Aerope. He was the brother of Agamemnon. His wife was Helen, the most beautiful woman in the world, and with her he had a daughter, Hermione. Because of his marriage with Helen, he was King of Sparta. The Trojan War was started because Paris took Helen away.

All content from Kiddle encyclopedia articles (including the article images and facts) can be freely used under Attribution-ShareAlike license, unless stated otherwise. Cite this article:
Menelaus Facts for Kids. Kiddle Encyclopedia.