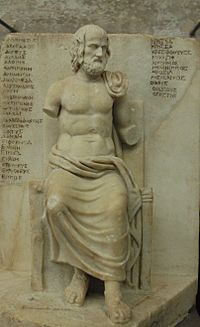 A statue of Euripides

Euripides (c. 480 BC–406 BC) was an Ancient Greek writer from Athens who wrote about 90 plays. Only 18 of his tragedies have survived complete, more than all other surviving ancient Greek tragedies put together. A nineteenth play, Rhesus is sometimes thought to be by Euripides, but not all classicists agree on this.

Euripides was the last of the three greatest Ancient Greek writers of tragedies, the others being Aeschylus and Sophocles.

All content from Kiddle encyclopedia articles (including the article images and facts) can be freely used under Attribution-ShareAlike license, unless stated otherwise. Cite this article:
Euripides Facts for Kids. Kiddle Encyclopedia.