Classical Athens refers to the city of Athens from 508 to 322 BC. Athenian democracy was established in 508 BC under Cleisthenes, after the tyranny of the Peistratids and the rule of Isagoras. This system remained remarkably stable, and with a few brief interruptions remained in place for 180 years, until 322 BC. Athens was one of the most powerful cities in ancient times. It was important because there democracy developed.

In 477 B.C. Athens began the Delian League to join the city-states for protection. Their rival was the Peloponnesian League led by Sparta. The Delian League's money was kept in the temple of Apollo. 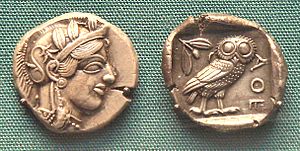 In the classical period, Athens was a center for the arts, learning and philosophy, home of Plato's Akademia and Aristotle's Lyceum. Athens was also the birthplace of Socrates, Pericles, Sophocles, and other philosophers, writers and politicians of the ancient world. It is widely referred to as the cradle of western civilization, and the birthplace of democracy. Its culture and political achievements during the 5th and 4th centuries BC had widespread effects.

The classical period is usually dealt with by its most important political events, as follows:

When King Xerxes of Persia fought the Greeks of Asia Minor, Athens helped them. In time, the Persians attacked Greece and the Greco-Persian wars began.n

On the plain of Marathon, many Persians with bows and arrows fought the Greeks. Even though there were many more Persians than Greeks, the Greeks won because they had spears and swords of metal.

Themistocles, a statesman of Athens, warned the Athenians that the Persians would return, so they should make their navy bigger. The people did so, and Sparta offered to help. The Persians arrived and attacked the Greeks, both on land and on sea. The Persians won the battle of Thermopylae but the battle gave the Greeks time to get ready.

Although the city of Athens was burnt down before the Persians left, most of the people had run away to the nearby islands for safety. Themistocles ordered the Greeks to prepare for another attack. This time he told them to leave their ships in the Bay of Salamis. When the Persians arrived, they were surprised and confused by the harbor that was so full of ships they could not travel in it. In this battle of Salamis a few hundred Greek ships destroyed many, many Persian ships. Xerxes went away. 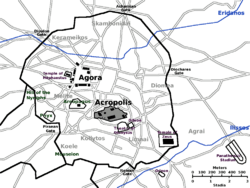 Map of ancient Athens showing the Acropolis in middle, the Agora to the northwest, and the city walls.

The next year, another battle happened, which 32,000 Greek hoplites and 50,000 other soldiers won. The Persians did not attack Greece again.

Even though Sparta and Athens helped each other in battle, they were very different culturally. In 431 to 404 B.C., these two city-states fought in a conflict called the Peloponnesian War after the name of the lower part of the peninsula. Sparta had help from other states. Athens kept inside the city walls, but many people died because of a terrible sickness, including Pericles.

Athens' navy was taken by Spartans who had been trained severely since they were children. In 404 B.C., Athens surrendered to Sparta.

For 30 years Sparta ruled, but many people did not like Spartan government, and Thebes, another city-state, helped Athens defeat Sparta. For nine years Thebes was the most powerful state.

However, Greece was much weaker because of the wars inside her country. Philip of Macedonia began to move into Greek territory. Although Demosthenes warned Athens of the danger, Athenians did not care. At Chaeronea, Philip of Macedonia controlled Greece.

When Philip died, his son, Alexander the Great, even though he was only 20 years, went out to capture the world. He won Asia Minor, Persia, Egpyt, and some parts of India, but he died when he was 32 because of an unknown ailment.

The people in Athens ate simply, usually barley cakes, onions, fish, and fruit. For clothes the men wore short pieces of cloth (tunics), aprons, and sandals for work. A woman wore a chiton, which was a long, loose cloth that was attached to the shoulder. The loose garment was like a blouse because of a rope worn around the waist. Sandals were made by putting the foot on a piece of skin while the shoemaker made a covering for the foot. 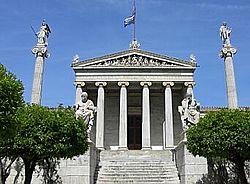 The modern National Academy in Athens, with Apollo and Athena on their columns, and Socrates and Plato seated in front.

Children liked to have pet rabbits and to play ball games. For fun, they also raced little chariots pulled by dogs. They were taught by slaves, and learned poetry, music, and dancing. Exercise was also important.

When a young man became 18, he began two years of training for the army. After that he could join in the men's classes where javelin throwing was done. For protection in wrestling, he tied leather strips around his wrists. He also cut his hair. Teachers from many lands taught the young men.

The Greek hoplites fought so close together that their shields overlapped with each other. Their spears were very long.

Girls could not be citizens. They left their home at the age of 14 to get married, sometimes with a man who was much older than she was (about 30 years old). Her marriage would be arranged by her father. On most occasions, the father would pick a rich husband for his daughter. The girl and her mother had no say in who she married, it was entirely the father's choice.

Contrast that with Sparta. Spartan women enjoyed a status, power, and respect that was unknown in the rest of the classical world. Although Spartan women were excluded from military and political life they enjoyed considerable status as mothers of Spartan warriors. As men engaged in military activity, women took responsibility for running estates.

In the 4th century BC Spartan women owned approximately between 35% and 40% of all Spartan land and property. By the Hellenistic Period, some of the wealthiest Spartans were women. They controlled their own properties, as well as the properties of male relatives who were away with the army. Spartan women rarely married before the age of 20, and unlike Athenian women who wore heavy, concealing clothes and were rarely seen outside the house, Spartan women wore short dresses and went where they pleased. Girls as well as boys received an education.

All content from Kiddle encyclopedia articles (including the article images and facts) can be freely used under Attribution-ShareAlike license, unless stated otherwise. Cite this article:
Classical Athens Facts for Kids. Kiddle Encyclopedia.