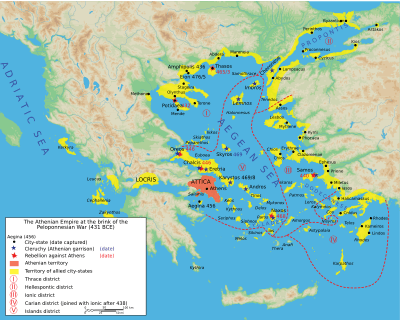 Delian League, before the Peloponnesian War in 431 BC.

The Delian League was founded in 478 BC. It was an association of Greek city-states under the leadership of Athens. The League had a many cities: at various times between 150 and 330.

The League was led by Athens to continue fighting the Persian Empire. The Greeks had won the Battle of Plataea at the end of the Second Persian invasion of Greece.

The League's modern name comes from its official meeting place, the island of Delos, where congresses were held in the temple. The treasury stood there, until Pericles moved it to Athens in 454 BC.

Soon after the League was set up, Athens began to use the League's funds for its own purposes. This led to conflict between Athens and the less powerful members of the League. By 431 BC, the League presented a threat to Sparta. This, and Athens's heavy-handed control of the League, started the Peloponnesian War. The League was dissolved after the war's end in 404 BC by the order of Lysander, the Spartan commander.

All content from Kiddle encyclopedia articles (including the article images and facts) can be freely used under Attribution-ShareAlike license, unless stated otherwise. Cite this article:
Delian League Facts for Kids. Kiddle Encyclopedia.