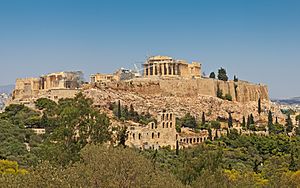 Acropolis of Athens, a noted polis of classical Greece. 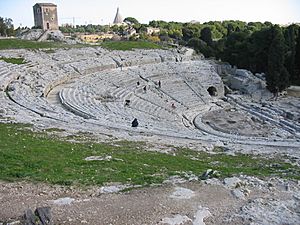 Polis means a city, a city-state and also citizenship and body of citizens. In context with Ancient Greece polis means nearly always "city-state."

The word originates from the ancient Greek city-states, which developed during the Archaic period and existed well into Roman times, when the equivalent Latin word was civitas, that means 'citizenhood' as well.

The bounds of the ancient polis often centered around a citadel, called the acropolis. Nearly always it had an agora (market) and typically one or more temples and a gymnasium. Many citizens of a polis did not live in the central city but in the suburbs or countryside. The Greeks regarded the polis as a religious and political association: while the polis would control territory and colonies beyond the city itself, the polis would not simply consist of a geographical area.

There are a lot of words in many modern European languages that come from polis. In English there are policy, polity, police and politics. In Greek, words coming from polis include politēs and politismos.

A number of words end in the word "-polis". Most refer to a special kind of city and/or state. Some examples are:

Other refer to part of a city or a group of cities, such as:

The names of several other towns and cities in Europe and the Middle East have contained the suffix "-polis" since antiquity; or currently feature modernized spellings, such as "-pol". Some of the examples are:

The names of other cities were also given the suffix "-polis" after antiquity, either referring to ancient names or simply unrelated:

All content from Kiddle encyclopedia articles (including the article images and facts) can be freely used under Attribution-ShareAlike license, unless stated otherwise. Cite this article:
Polis Facts for Kids. Kiddle Encyclopedia.