Solon was a statesman in Ancient Greece. He is one of Seven Sages (or Wise Men) of Greece, because of his political reforms to the laws of Athens. Many of these changes helped the poor people. He lived from 630 B.C.- 560 B.C. He introduced the court and judges. About 594 B.C., the nobles elected Solon to lead Athens. He made reforms that helped prevent a revolt by the poor. First he freed people who had become slaves because of debts. He made a law that no citizen could be enslaved. Solon also organized citizens into four classes based on wealth, not birth. Rich men had more power; yet this was still a fairer system than the old one that limited power to nobles. Solon allowed all citizens to serve in the assembly and help elect leaders. He also reformed the laws to make them less harsh.

Solon was born in Athens around 630 BC. His family belonged to a noble clan, and his lineage could probably be traced back to Codrus, the last King of Athens. According to Diogenes Laërtius, he had a brother named Dropides, who was an ancestor (six generations removed) of Plato. According to Plutarch, Solon was related to the tyrant Pisistratus, for their mothers were cousins. Solon was eventually drawn into commerce that was considered to be unaristocratic. 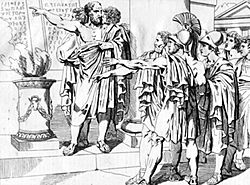 When Athens and Megara were fighting for the possession of Salamis, Solon was made leader of the Athenian forces. After repeated disasters, Solon was able to improve the morale of his troops through a poem he wrote about the island. Supported by Pisistratus, he defeated the Megarians either by means of a cunning trick or more directly through heroic battle around 595 BC. The Megarians, however, refused to give up their claim. The dispute was referred to the Spartans, who eventually awarded possession of the island to Athens.

According to Diogenes Laertius, in 594 BC, Solon was chosen archon, or chief magistrate. As archon, Solon discussed his intended reforms with some friends. Knowing that he was about to cancel all debts, these friends took out loans and promptly bought some land. Suspected of complicity, Solon complied with his own law and released his own debtors, amounting to five talents (or 15 according to some sources). His friends never repaid their debts.

After he had finished his reforms, he travelled abroad for ten years, so that the Athenians could not induce him to repeal any of his laws. His first stop was Egypt. There, according to Herodotus, he visited the Pharaoh of Egypt, Amasis II. According to Plutarch, he spent some time and discussed philosophy with two Egyptian priests, Psenophis of Heliopolis and Sonchis of Sais. A character in two of Plato's dialogues, Timaeus and Critias, claims Solon visited Neith's temple at Sais and received from the priests there an account of the history of Atlantis. Next, Solon sailed to Cyprus, where he oversaw the construction of a new capital for a local king, in gratitude for which the king named it Soloi. 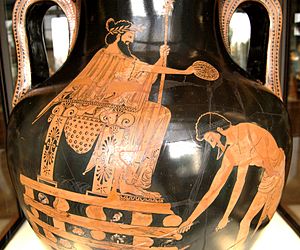 Solon's travels finally brought him to Sardis, capital of Lydia. According to Herodotus and Plutarch, he met with Croesus and gave the Lydian king advice, which Croesus failed to appreciate until it was too late. Croesus had considered himself to be the happiest man alive and Solon had advised him, "Count no man happy until he be dead." The reasoning was that at any minute, fortune might turn on even the happiest man and make his life miserable. It was only after he had lost his kingdom to the Persian king Cyrus, while awaiting execution, that Croesus acknowledged the wisdom of Solon's advice.

After his return to Athens, Solon became a staunch opponent of Pisistratus. In protest, and as an example to others, Solon stood outside his own home in full armour, urging all who passed to resist the machinations of the would-be tyrant. His efforts were in vain. Solon died shortly after Pisistratus usurped by force the autocratic power that Athens had once freely bestowed upon him. Solon died in Cyprus at the age of 80 and, in accordance with his will, his ashes were scattered around Salamis, the island where he was born.

All content from Kiddle encyclopedia articles (including the article images and facts) can be freely used under Attribution-ShareAlike license, unless stated otherwise. Cite this article:
Solon Facts for Kids. Kiddle Encyclopedia.