Croesus was renowned for his wealth; Herodotus and Pausanias noted that his gifts were preserved at Delphi. The fall of Croesus had a profound impact on the Greeks, providing a fixed point in their calendar. "By the fifth century at least," J. A. S. Evans has remarked, "Croesus had become a figure of myth, who stood outside the conventional restraints of chronology."

Aside from a poetical account of Croesus on the pyre in Bacchylides (composed for Hiero of Syracuse, who won the chariot race at Olympia in 468), there are three classical accounts of Croesus: Herodotus presents the Lydian accounts of the conversation with Solon (Histories 1.29–.33), the tragedy of Croesus' son Atys (Histories 1.34–.45) and the fall of Croesus (Histories 1.85–.89); Xenophon instances Croesus in his panegyric fictionalized biography of Cyrus: Cyropaedia, 7.1; and Ctesias, whose account is also an encomium of Cyrus. Croesus is a descendant of Gyges, of the Myrmnadae Clan, who seized power when Gyges killed Candaules after Candaules's wife found out about a conspiracy to watch her disrobe, according to Herodotus.

Gold coin of Croesus, Lydian, around 550 BC, found in what is now modern Turkey

Reportedly, Croesus on the death of his father Alyattes faced a rival claimant to the throne in Pantaleon, son of Alyattes by a different mother. Croesus prevailed, and a number of the opposite faction were executed, and their property confiscated. As soon as his reign was secure, Croesus continued his sires' wars against the Asian Greeks, bringing all the Aeolian and Ionian Settlements on the coasts of Asia-Minor under Lydian rule, from whom he exacted tribute; However, he was willing to be friendly to European and Aegean Greeks, concluding various treaties with them, with Sparta, in particular, later in life.

Croesus is credited with issuing the first true gold coins with a standardised purity for general circulation, the Croeseid (following on from his father Alyattes who invented minting with electrum coins). Indeed, the invention of coinage had passed into Greek society through Hermodike II. Hermodike II was likely one of Alyettes’ wives so may have been Croesus’ mother because the bull imagery on the croeseid symbolises the Hellenic Zeus -see Europa (consort of Zeus). Zeus, through Hercules, was the divine forefather of his family line.

"While the pyre was burning, it is said that a cloud passed under Hercules and with a peal of thunder wafted him up to heaven. Thereafter he obtained immortality... by Omphale he had Agelaus, from whom the family of Croesus was descended..."

The dynasty which preceded that of Croesus on the throne of Sardes traced their descent from Alcaeus, the son of Hercules by Omphale, Queen of Lydia, during her year of required servitude. Like his ancestor Hercules, Croesus attempted to burn himself on a pyre when the Persians captured Sardes. By emulatinging the Greek myth, he demonstrated he had - or believed he had - Greek heritage.

Moreover, the first coins were quite crude and made of electrum, a naturally occurring pale yellow alloy of gold and silver. The composition of these first coins was similar to alluvial deposits found in the silt of the Pactolus river (made famous by Midas), which ran through the Lydian capital, Sardis. Later coins, including some in the British Museum, were made from gold purified by heating with common salt to remove the silver.

In Greek and Persian cultures the name of Croesus became a synonym for a wealthy man. He inherited great wealth from his father who had become associated with the Midas mythology because Lydian precious metals came from the river Pactolus in which King Midas supposedly washed away his ability to turn all he touched into gold. Aylettes’ tax revenue may be the real ‘Midas touch’ financing his and Croesus conquests. Croesus' wealth remained proverbial beyond classical antiquity: in English, expressions such as "rich as Croesus" or "richer than Croesus" are used to indicate great wealth to this day. 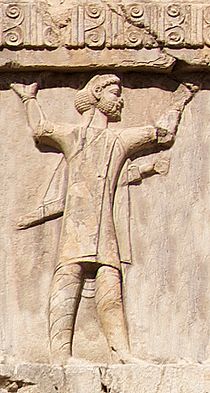 It is not known when exactly Croesus died, although it could be aligned with the traditional date for Cyrus' conquest of Lydia in 546 BC. In the Nabonidus Chronicle it is said that Cyrus "marched against the country –, killed its king, took his possessions, put there a garrison of his own".

References to Croesus' legendary power and wealth, often as a symbol of human vanity, are numerous in literature. The following, by Isaac Watts, is from the poem titled "False Greatness":

Thus mingled still with wealth and state,
Croesus himself can never know;
His true dimensions and his weight
Are far inferior to their show.

Other literary examples are "Croesus and Fate", a short story by Leo Tolstoy that is a retelling of the account of Croesus as told by Herodotus and Plutarch; and "Crœsus, King of Lydia", a tragedy in five parts by Alfred Bate Richards, first published in 1845.

All content from Kiddle encyclopedia articles (including the article images and facts) can be freely used under Attribution-ShareAlike license, unless stated otherwise. Cite this article:
Croesus Facts for Kids. Kiddle Encyclopedia.