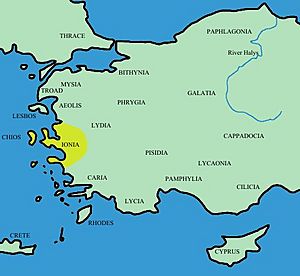 Location of Ionia in Turkey.

Ionia was a region in the west of Asia Minor in Ancient Greek times. It was in what is now Turkey. It was the birthplace of the Hellenic civilization. The Dorian invasion of the Peloponnesus, caused the migration of Ionic Greeks across the Aegean sea to Anatolia about 1000-900 BCE. The original Greek settlements in the region were numerous and small, but by the 8th century BCE they had consolidated themselves into 12 major cities—Phocaea, Erythrae, Clazomenae, Teos, Lebedus, Colophon, Ephesus, Priene, Myus, and Miletus on the mainland, with the islands Chios and Samos.By the end of the 7th century the Ionian cities had achieved great prosperity through their trading enterprises, their colonization efforts, and their manufacture of ceramics, textiles, and metalware. After World War One it was granted to Greece from Turkey in the Treaty of Sèvres, along with most of the islands in the Aegean sea, Thrace, and Turkey's most important city, Istanbul. The Turkish army drove the Greeks out soon after, killing many Greek people. They did not challenge the Greeks on the Aegean Islands, though.

All content from Kiddle encyclopedia articles (including the article images and facts) can be freely used under Attribution-ShareAlike license, unless stated otherwise. Cite this article:
Ionia Facts for Kids. Kiddle Encyclopedia.