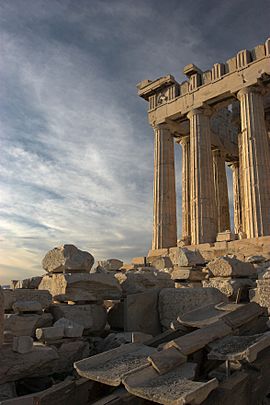 The Parthenon, in Athens, a temple to Athena.

Classical Greece was the period from about 500–323 BC. It had a civilisation and style which was considered by later observers to be outstanding. Politically, the classical period was dominated by Athens and the Delian League during the 5th century, or from the beginning of the Greco-Persian Wars to the Peloponnesian War in 404 BC.

It was a period in Greek culture of about 200 years in the 5th through 4th centuries BC. culture It influenced the cultures of ancient Rome and still has an enduring effect on Western civilization. Much of modern Western politics, artistic thought, scientific thought, literature, and philosophy derives from this ancient society.

The Persian Wars ushered in a century of Athenian dominance in Greek affairs. Athens was the unchallenged master of the sea and also the leading commercial power. The leading statesman of this time was Pericles, who used the tribute paid by the members of the Delian League to build the Parthenon and other great monuments of Classical Athens.

The wealth of Athens attracted talented, skilled people from all over Greece, and also created a wealthy leisure class who became patrons of the arts. The Athenian state sponsored learning and the arts, particularly architecture. Athens became the centre of Greek literature, philosophy (see Greek philosophy), and the arts (see Greek theatre). Some of the greatest figures of Western cultural and intellectual history lived in Athens during this period: the dramatists Aeschylus, Aristophanes, Euripides, and Sophocles; the philosophers Aristotle, Plato, and Socrates; the historians Herodotus, Thucydides, and Xenophon; the poet Simonides; and the sculptor Pheidias. The city became, in Pericles' words, "the school of Hellas". 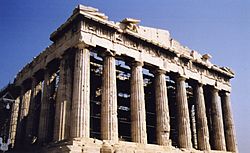 The western side of the Parthenon on the Acropolis of Athens.

The end of the Peloponnesian War left Sparta the master of Greece, but the narrow outlook of the Spartan warrior elite did not suit them to this role. Within a few years the democratic party regained power in Athens and in other cities.

The Peloponnesian War was a radical turning point for the Greek world. After 403 BC, things became more complicated, with a number of cities trying to create similar empires over others, all of which proved short-lived.

The Corinthian War revealed a significant dynamic that was occurring in Greece. While Athens and Sparta fought each other to exhaustion, Thebes was rising to a position of dominance among the various Greek city-states.

The Fall of Sparta 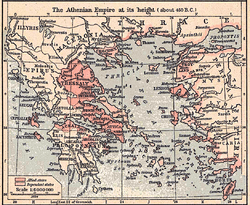 This empire was powerful but short-lived. In 405 BC, the Spartans were masters of all - of Athens’ allies and of Athens itself - and their power was undivided. By the end of the century, they could not even defend their own city.

The Athenians forbade themselves any return to the situation in the 5th century. In Aristotle's decree, Athens claimed its goal was to prevent Spartan hegemony, with the Spartans clearly denounced as "warmongers".

Though somewhat eclipsed by technology today, the sense of a legacy was strongly felt by post-Renaissance European elite, who saw themselves as the spiritual heirs of Greece. As late as 1939 Will Durant could write "excepting machinery, there is hardly anything secular in our culture that does not come from Greece," and conversely "there is nothing in Greek civilization that doesn't illuminate our own".

All content from Kiddle encyclopedia articles (including the article images and facts) can be freely used under Attribution-ShareAlike license, unless stated otherwise. Cite this article:
Classical Greece Facts for Kids. Kiddle Encyclopedia.