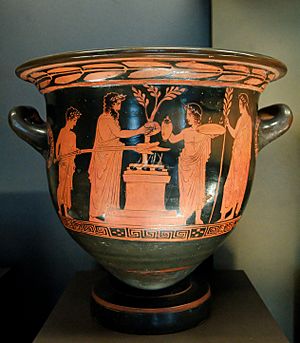 Scene of a ritual sacrifice with libation on Ancient Greek pottery, dating to 430-420 BC.

A libation is a ritual pouring of a liquid (ex: milk or other fluids such as corn flour mixed with water), or grains such as rice, as an offering to a god or spirit, or in memory of those who have "passed on". It was common in many religions of antiquity and continues to be offered in various cultures today.

Various substances have been used for libations, most commonly wine, olive oil, or urine and in India, ghee. The vessels used in the ritual, including the patera, often had a significant form which differentiated them from secular vessels. The libation could be poured onto something of religious significance, such as an altar, or into the earth.

In East Asia, pouring an offering of rice into a running stream, symbolizes the unattachment from karma and bad energy.

All content from Kiddle encyclopedia articles (including the article images and facts) can be freely used under Attribution-ShareAlike license, unless stated otherwise. Cite this article:
Libation Facts for Kids. Kiddle Encyclopedia.