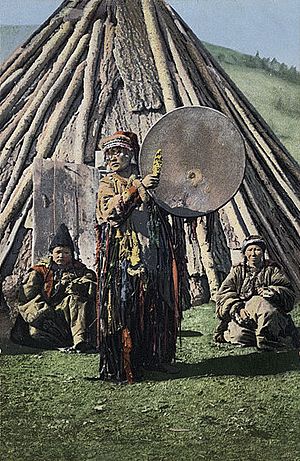 Russian postcard based on a photo taken in 1908 by S.I. Borisov, showing a female shaman, of probable Khakas ethnicity.

A shaman is a kind of medicine man who practices shamanism. Shamans were believed to be able to talk to the spirit world, usually animal spirits. The job of the shamans are believed to be is healing, weather control or any other supernatural stuff. In some tribes shamanism is important such as the Yanomamis (a Venezuelan tribe in the Venezuelan forest) A shaman was a person who had a special connection to the spiritual world..

All content from Kiddle encyclopedia articles (including the article images and facts) can be freely used under Attribution-ShareAlike license, unless stated otherwise. Cite this article:
Shaman Facts for Kids. Kiddle Encyclopedia.