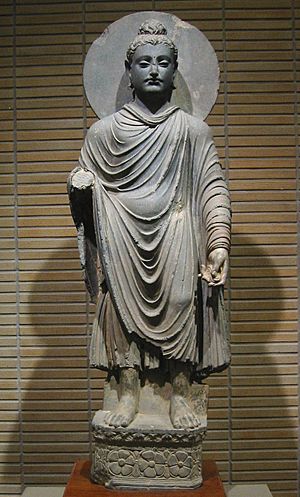 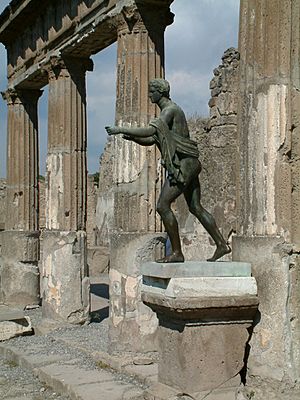 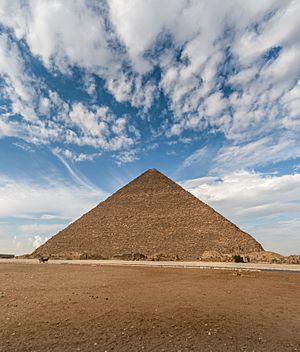 The Great Pyramid of Giza

Ancient history is all the events we know about between the invention of writing and the start of the Middle Ages. Writing is one of the greatest inventions of the human species. It was invented after the Neolithic revolution in which people settled in small towns and started agriculture. Writing dates from about 3,300 BC, which is over 5000 years ago, in the Middle East. The first people to use writing were the Sumerians and the Ancient Egyptians.

Before writing, the only things we have are the tools and monuments made by earlier people. This is studied by archaeology rather than history. The period of ancient history ends with the early Middle Ages.

Finding facts about ancient history is difficult because people wrote less in those times and much of what they did write has been lost. There were very few copies made because there was no printing. What people wrote they wrote by hand.

More people could read and write in Ancient Rome than in other places but much of what they wrote is now lost. Historians also look at things that were made and used in ancient history to learn more about it. 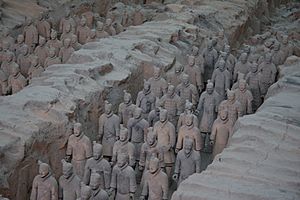 Archaeology is looking at things that were made or used in the past to learn about that time. Things like clay pots, solid tools, and metal weapons can stay the same during a long time. Things like paper, wood, and cloth can be easily broken, burnt or damaged.

Primary sources are written by people who lived in ancient times. They tell us most of what we know about ancient history. But people in ancient history may have believed different things from each other. They may also be wrong. 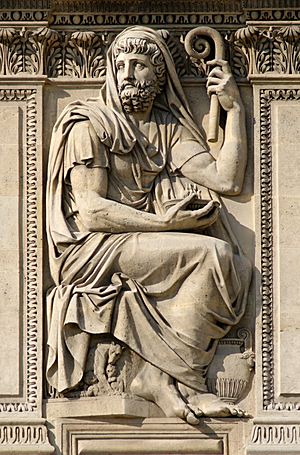 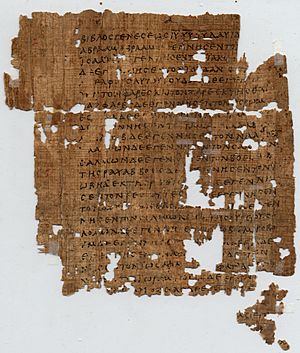 Papyrus - a New Testament manuscript of the Gospel of Matthew, most likely originated in Egypt 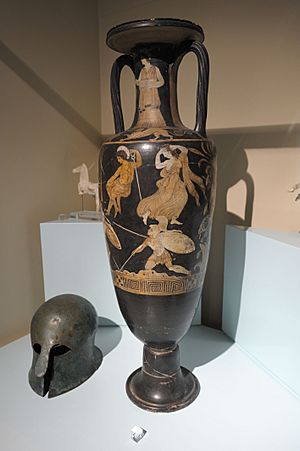 Scene from the Trojan war 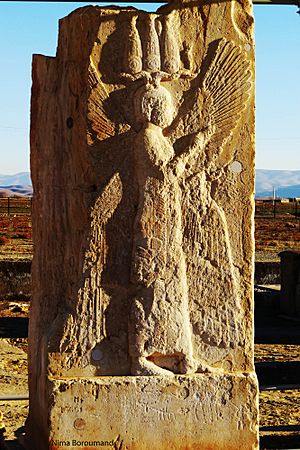 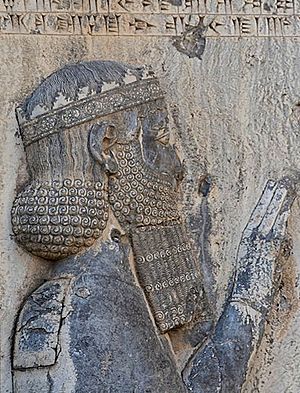 Battle of Marathon - display of an ancient Athenian warrior in armor 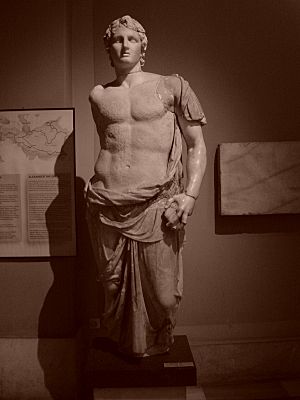 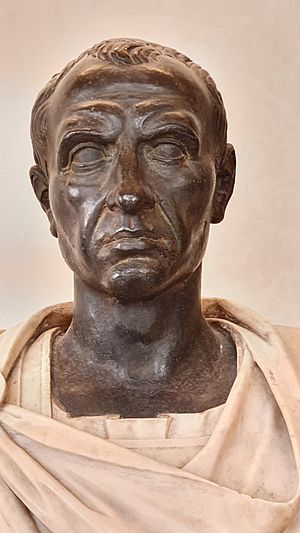 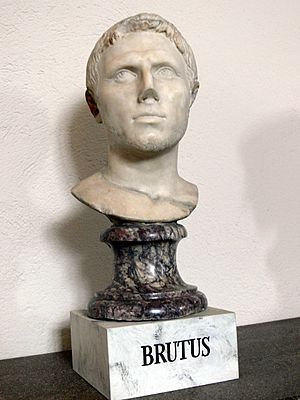 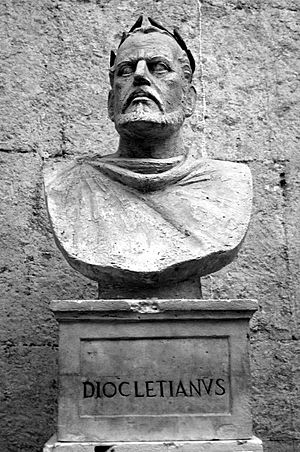 Some groups of people in ancient history

Europe and the Mediterranean 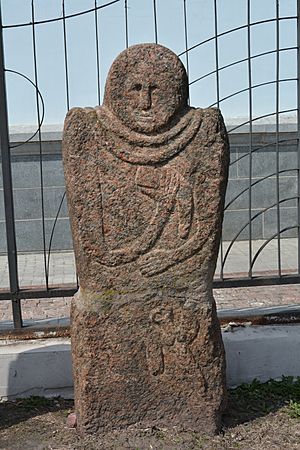 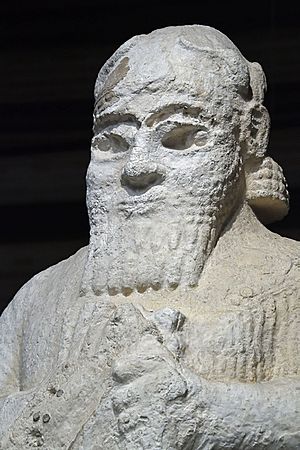 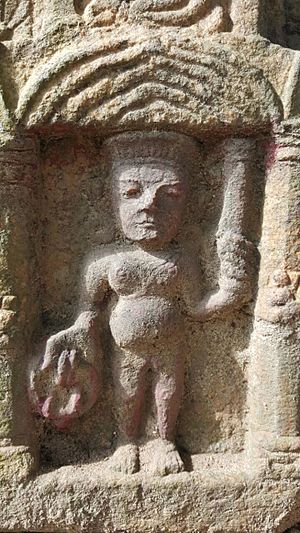 A statue from Ancient India

End of the period

The term Late Antiquity is the transitional centuries from Classical Antiquity to the Middle Ages in both mainland Europe and the Mediterranean world: generally from the end of the Roman Empire's Crisis of the 3rd century (c. 284) to the Islamic conquests and the re-organization of the Byzantine Empire under Heraclius that occurred in the seventh century. 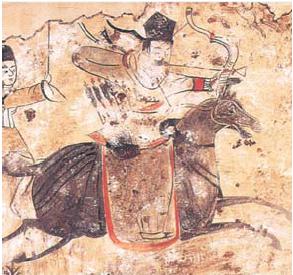 Painting of Murong Xianbei archer, in Late Antiquity, nomads across Eurasia, began to use the stirrup

The beginning of the post-classical age (known as the Middle Ages for Europe) following the fall of the Western Roman Empire spanning roughly from A.D 500 to 1500.

The Western Roman Empire in Europe and the Gupta Empire in India, and the Jin in North China were overwhelmed by tribal invasions. Nomadic invasions along with worldwide natural climate change, the Plague of Justinian and the rise of religions changed the face of the Old World.

By 500 the world era of Post-classical history had begun.

Despite being placed in different eras of history in an academic view of world history, Ancient and Post Classical eras are linked with each other in the case of the Old World. Land and coastal trade routes, often went on similar or the same directions, and many of the inventions and religions which started prior to 500 A.D such as Christianity, Judaism, Hinduism and Buddhism grew to be even more important for societies and individuals.

All content from Kiddle encyclopedia articles (including the article images and facts) can be freely used under Attribution-ShareAlike license, unless stated otherwise. Cite this article:
Ancient history Facts for Kids. Kiddle Encyclopedia.