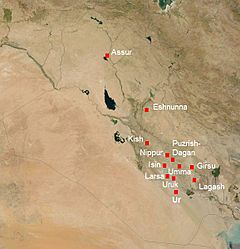 Sumer is the earliest known civilization in southern Mesopotamia (in modern-day southern Iraq). They may have been one of the first civilizations in the world, as were Ancient Egypt and the Indus Valley.

Sumer started around 3500 BC. The Sumerian civilization grew along the Tigris and Euphrates. This land was good for growing food. Sumerian culture is famous for its written cuneiform script - where letters were formed by pressing a triangle shaped reed into wet-clay tiles. They are also credited with creating the wheel, and dividing a day into 24 hours, and each hour into 60 minutes.

The earliest texts come from the cities of Uruk and Jemdet Nasr and date back to 3300 BC. Early cuneiform script writing emerged in 3000 BC.

Sumerian communities were organized into city-states, each ruled by a priest or king, until Akkad conquered them in the third millennium BC. One of the most famous Sumerian cities was Ur (not the same city as Uruk, but near it).

Relations with the Akkadians

During the 3rd millennium BC, a close cultural symbiosis developed between the Sumerians, who spoke a language isolate, and Akkadian-speakers, which included widespread bilingualism.

The Sumerian city of Eridu, on the coast of the Persian Gulf, may have been the world's first city.

The Sumerians lost their identity with their language around 2000 BC, because a large group of different people, the Amorites, moved into their region. The Sumerian language continued as a religious language taught in schools in Babylonia and Assyria, for as long as cuneiform was used.

The Sumerians made their clothing by using the natural resources that were available to them. Clothing was made from wool or flax which Sumerians could raise and harvest. How thick or how coarse the clothing was related to the season in which it was worn. Heavier clothing was worn in the winter, lighter clothing in the summer.

Men were bare-chested and wore skirt-like clothes that tied at the waist. Women usually wore dresses that covered them from their shoulders to their ankles. The right arm and shoulder were left uncovered. Men were either clean shaven or had long hair and beards. Women wore their hair long, but they usually braided it and wrapped it around their heads. When entertaining guests, women placed headdresses in their hair.

Both men and women wore earrings and necklaces. During celebrations, even more jewelry was worn. The wealthier Sumerians often wore beautiful gold and silver bracelets and earrings. Sumerians also wore necklaces with bright, precious stones. Some of these stones were lapis lazuli and carnelian.

All content from Kiddle encyclopedia articles (including the article images and facts) can be freely used under Attribution-ShareAlike license, unless stated otherwise. Cite this article:
Sumer Facts for Kids. Kiddle Encyclopedia.