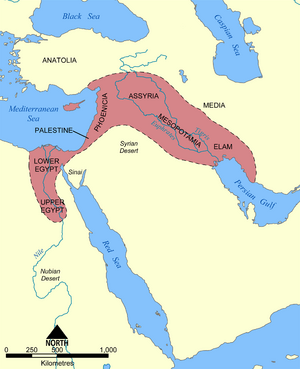 This map shows the extent of the Fertile Crescent.

The Fertile Crescent is a historical region in the Middle East that includes the Levant, Mesopotamia and Ancient Egypt. These countries on a map together have a shape that is similar to a crescent, so archaeologist James Henry Breasted spoke of the "Fertile Crescent" because he wanted to show the similarities of the cultures of this region in ancient times.

All these lands are watered by important rivers: Nile, Jordan, Euphrates and Tigris. Together they cover some 400-500,000 square kilometers, and the region extends from the eastern shore of the Mediterranean Sea around the north of the Syrian Desert and through the Jazirah and Mesopotamia to the Persian Gulf. These areas are in present-day Egypt, Israel, West Bank, Gaza strip, and Lebanon and parts of Jordan, Syria, Iraq, south-eastern Turkey and south-western Iran. The population of the Nile River basin is about 70 million, the Jordan River basin about 20 million, and the Tigris and Euphrates basins about 30 million, giving the present-day Fertile Crescent a total population of around 120 million, or at least a quarter of the population of the Middle East.

The Fertile Crescent has a very long record of past human activity.

All content from Kiddle encyclopedia articles (including the article images and facts) can be freely used under Attribution-ShareAlike license, unless stated otherwise. Cite this article:
Fertile Crescent Facts for Kids. Kiddle Encyclopedia.