Three Onagers in the desert in Iran

The Onager (Equus hemionus) is a large mammal belonging to the Equidae family. It is native to the deserts of Syria, Iran, Pakistan, Kashmir, Israel and Palestine, and western China. It is sometimes known as the Asian Wild Ass. 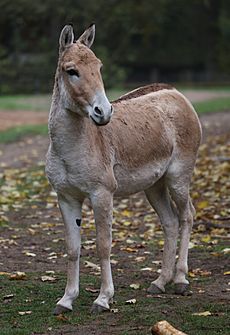 Onagers are the most horse-like of wild asses. They are short-legged compared to horses, and their coloring varies depending on the season. They are generally reddish-brown in color during the summer, becoming yellowish-brown or grayish-brown in the winter. They have a black stripe bordered in white that extends down the middle of the back. The belly, the rump, and the muzzle are white in most onagers, except for the Mongolian wild ass that has a broad black dorsal stripe bordered with white.

Asiatic wild asses are mostly active at dawn and dusk, even during the intense heat. 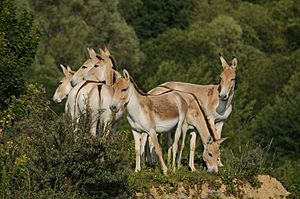 A group of onagers 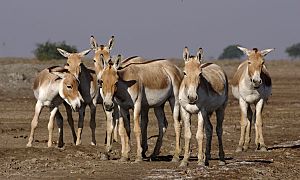 Like most equids, onagers are social animals. Stallions are either solitary or live in groups of two or three. The males have been observed holding harems of females, but in other studies, the dominant stallions defend territories that attract females. Differences in behaviour and social structure likely are the result of changes in climate, vegetation cover, predation, and hunting.

The social behavior of the Asian wild ass can be very different, depending on different habitats, ranges, and even threats by predators and humans.

Southern populations of onagers in the Middle East and South Asia tend to have a purely territorial life, where areas partly overlap. Dominant stallions have home ranges of 9 km2 (3.5 sq mi), but they can also be significantly larger. These territories include food and rest stops and permanent or periodic water sources. The waters are usually at the edge of a coalfield and not in the center.

Mares with foals sometimes find themselves in small groups, in areas up to 20 km2 (7.7 sq mi), which overlap with those of the other groups and dominant stallions. Such features are seen in Grévy's zebras and the African wild asses.

Breeding is seasonal, and the gestation period of onagers is 11 months; the birth lasts a little more than 10 minutes.

The foal can stand and starts to nurse within 15 to 20 minutes. Females with young tend to form groups of up to five females. During rearing, a foal and dam remain close, but other animals and her own older offspring are displaced by the dam. Occasionally, stallions in territorial wild populations expel the young to mate with the mare again. Wild Asian wild asses reach an age of 14 years, but in captivity, they can live up to 26 years. 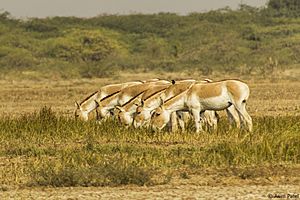 Like all equids, onagers are herbivorous mammals. They eat grasses, herbs, leaves, fruits, and saline vegetation when available, but browse on shrubs and trees in drier habitats. They have also been seen feeding on seed pods such as Prosopis and breaking up woody vegetation with their hooves to get at more succulent herbs growing at the base of woody plants.

During the winter, onagers also eat snow as a substitute for water. When natural water sources are unavailable, the onager digs holes in dry riverbeds to access subsurface water. The water holes dug by the onagers are often subsequently visited by domestic livestock, as well as other wild animals. Water is also found in the plants on which the onagers feed.

During spring and summer in Mongolia, the succulent plants of the Zygophyllaceae form an important component of the diet of the Mongolian wild ass. 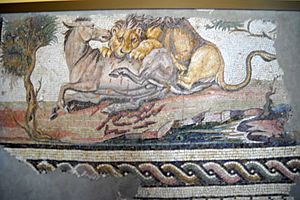 The onager is preyed upon by apex predators such as Persian leopard and striped hyenas. A few cases of onager deaths due to predation by leopards were recorded in Iran. Though leopards do not usually feed on equids as in Africa, this may be because Persian leopards are larger and strong enough to prey on Asiatic wild asses.

In the Middle East and the Indian subcontinent, Asiatic lions and tigers were the biggest predators of onagers. They were also formerly preyed upon by Asiatic wild dog, Asiatic cheetahs, and possibly bears, though they may have mostly preyed only on onager foals. In India, mugger crocodiles can be great threats to onagers during migratory river crossings.

Currently, the biggest predator for onagers are gray wolves. About 23% of prey proportion of gray wolves were on the Asian wild ass. However, like most equids, they are known to have antipredator protection. Groups of stallions cooperate and try to chase off predators. If threatened, onagers defend themselves and violently kick at the incoming predator.

All content from Kiddle encyclopedia articles (including the article images and facts) can be freely used under Attribution-ShareAlike license, unless stated otherwise. Cite this article:
Onager Facts for Kids. Kiddle Encyclopedia.