The Asiatic Cheetah (Acinonyx jubatus venaticus) is a subspecies of the cheetah. It is also called the Iranian Cheetah because the only living Asiatic cheetahs live in Iran. Even though it is extinct in India, it is sometimes called the Indian Cheetah. During British colonial times in India it was famous by the name of Hunting-Leopard. This name came about because some of these animals were kept captive by Indian royalty and used to hunt wild antelopes. 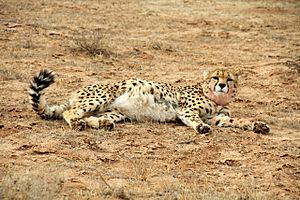 The Asiatic cheetah has a buff- to light fawn-coloured fur that is paler on the sides, on the front of the muzzle, below the eyes and inner legs. Small black spots are arranged in lines on the head and nape, but irregularly scattered on body, legs, paws and tail. The tail tip has black stripes. The coat and mane are shorter than of African cheetah subspecies. The head and body of an adult Asiatic cheetah measure about 112–135 cm (44–53 in) with a 66–84 cm (26–33 in) long tail. It weighs about 34–54 kg (75–119 lb). Males are slightly larger than the females.

The cheetah is the fastest land animal in the world. It was previously thought that the body temperature of a cheetah increases during a hunt due to high metabolic activity. In a short period of time during a chase, a cheetah may produce 60 times more heat than at rest, with much of the heat, produced from glycolysis, stored to possibly raise the body temperature. The claim was supported by data from experiments in which two cheetahs ran on a treadmill for minutes on end but contradicted by studies in natural settings, which indicate that body temperature stays relatively the same during a hunt. A 2013 study suggested stress hyperthermia and a slight increase in body temperature after a hunt. The cheetah's nervousness after a hunt may induce stress hyperthermia, which involves high sympathetic nervous activity and raises the body temperature. After a hunt, the risk of another predator taking its kill is great, and the cheetah is on high alert and stressed. The increased sympathetic activity prepares the cheetah's body to run when another predator approaches. In the 2013 study, even the cheetah that did not chase the prey experienced an increase in body temperature once the prey was caught, showing increased sympathetic activity. 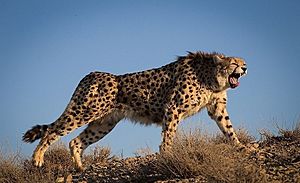 A cheetah in Iran

During the 1970s, the Asiatic cheetah population in Iran was estimated to number about 200 individuals in 11 protected areas. By the end of the 1990s, the population was estimated at 50 to 100 individuals. During camera-trapping surveys conducted across 18 protected areas between 2001 and 2012, a total of 82 individuals in 15–17 families were recorded and identified. Of these, only six individuals were recorded for more than three years. In this period, 42 cheetahs died due to poaching, in road accidents and due to natural causes. Populations are fragmented and known to survive in the Semnan, North Khorasan, South Khorasan, Yazd, Esfahan, and Kerman Provinces.

All content from Kiddle encyclopedia articles (including the article images and facts) can be freely used under Attribution-ShareAlike license, unless stated otherwise. Cite this article:
Asiatic Cheetah Facts for Kids. Kiddle Encyclopedia.