Kids Encyclopedia Facts
This page is about the animal. For India based automobile manufacturer, see Chinkara Motors.

The Chinkara (Gazella bennettii) or Jabeer Gazelle is a species of gazelle found in South Asia. It lives in grasslands and desert areas in the Republic of India, Bangladesh and parts of Iran and Pakistan. It is also known as the Indian Gazelle (Gazella gazella bennetti). 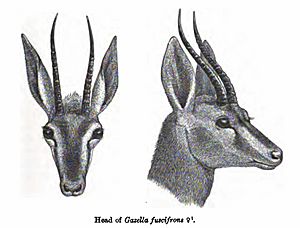 G. b. fuscifrons of Baluchistan

It stands at 65 cm (26 in) tall and weighs about 23 kg (51 lb). It has a reddish-buff summer coat with smooth, glossy fur. In winter, the white belly and throat fur is in greater contrast. The sides of the face have dark chestnut stripes from the corner of the eye to the muzzle, bordered by white stripes. Its horns reach over 39 cm (15 in). 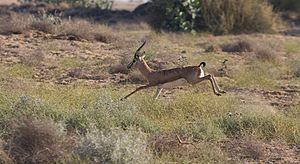 Chinkara live in arid plains and hills, deserts, dry scrub and light forests. They inhabit more than 80 protected areas in India. In Pakistan, they range up to elevations of 1,500 m (4,900 ft). In Iran, they inhabit the Kavir National Park.

In 2001, the Indian chinkara population was estimated at 100,000 with 80,000 living in the Thar Desert. The population in Pakistan is scattered, and has been severely reduced by hunting. Also in Iran, the population is fragmented. In Afghanistan, chinkaras are probably very rare.

Chinkaras are shy and avoid human habitation. They can go without water for long periods and can get sufficient fluids from plants and dew. Although most are seen alone, they can sometimes be spotted in groups of up to four animals. They share their habitat with several other herbivores, such as nilgai, blackbuck, chausingha, wild goats, and wild pigs.

Chinkaras are preyed upon by leopards, Bengal tigers, and dholes. The chinkara was a common prey of the Asiatic cheetah in India alongside blackbucks. Outside protected areas they may be attacked by pariah dogs, and both wolves and golden jackals are also known to hunt them.

All content from Kiddle encyclopedia articles (including the article images and facts) can be freely used under Attribution-ShareAlike license, unless stated otherwise. Cite this article:
Chinkara Facts for Kids. Kiddle Encyclopedia.