The Bengal tiger (Panthera tigris tigris) is a tiger subspecies native to the Indian subcontinent. It lives in Bhutan, Nepal, Bangladesh and northern India. It is the National animal of both India and Bangladesh.

The Bengal tiger's coat is yellow to light orange, with stripes ranging from dark brown to black; the belly and the interior parts of the limbs are white, and the tail is orange with black rings. The white tiger is a recessive mutant of the Bengal tiger, which is reported in the wild from time to time in Assam, Bengal, Bihar, and especially from the former State of Rewa. However, it is not to be mistaken as an occurrence of albinism. In fact, there is only one fully authenticated case of a true albino tiger, and none of black tigers, with the possible exception of one dead specimen examined in Chittagong in 1846. 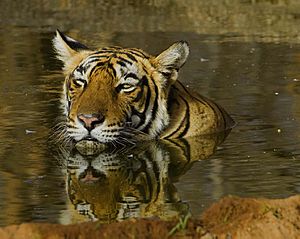 A Bengal tigress in the Ranthambhore Tiger Reserve. 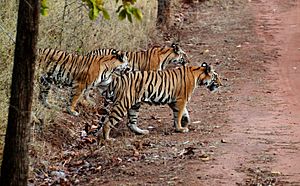 A Bengal tigress with her cubs in the Bandhavgarh National Park, India

Mostly they lead solitary lives, hunting individually for the dispersed forest and tall grassland animals, upon which they prey. They establish and maintain home ranges. Resident adults of either sex tend to confine their movements to a definite area of habitat within which they satisfy their needs, and in the case of tigresses, those of their growing cubs. Besides providing the requirements of an adequate food supply, sufficient water and shelter, and peace and seclusion, this location must make it possible for the resident to maintain contact with other tigers, especially those of the opposite sex. Those sharing the same ground are well aware of each other's movements and activities.

Tigers are carnivores. They prefer hunting large ungulates such as chital, sambar, gaur, and to a lesser extent also barasingha, water buffalo, nilgai, serow and takin. Among the medium-sized prey species they frequently kill wild boar, and occasionally hog deer, muntjac and grey langur. Small prey species such as porcupines, hares and peafowl form a very small part in their diet. Because of the encroachment of humans into their habitat, they also prey on domestic livestock. 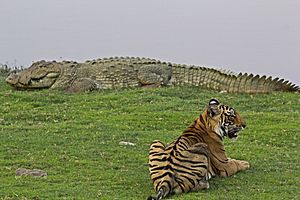 In most cases, tigers approach their victim from the side or behind from as close a distance as possible and grasp the prey's throat to kill it. Then they drag the carcass into cover, occasionally over several hundred meters, to consume it. The nature of the tiger's hunting method and prey availability results in a "feast or famine" feeding style: they often consume 18–40 kilograms (40–88 lb) of meat at one time.

Bengal tigers have been known to take other predators, such as leopards, wolves, jackals, foxes, crocodiles, Asiatic black bears, sloth bears, and dholes as prey, although these predators are not typically a part of their diet. 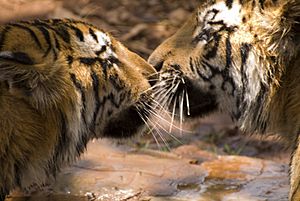 A male and female Bengal tiger interact with each other.

After a gestation period of 104–106 days, 1–4 cubs are born in a shelter situated in tall grass, thick bush or in caves.

Newborn cubs weigh 780 to 1,600 g (1.72 to 3.53 lb) and they have a thick wooly fur that is shed after 3.5–5 months. Their eyes and ears are closed. Their milk teeth start to erupt at about 2–3 weeks after birth, and are slowly replaced by permanent dentition from 8.5–9.5 weeks of age onwards. They suckle for 3–6 months, and begin to eat small amounts of solid food at about 2 months of age. At this time, they follow their mother on her hunting expeditions and begin to take part in hunting at 5–6 months of age. At the age of 2–3 years, they slowly start to separate from the family group and become transient — looking out for an area, where they can establish their own territory. Young males move further away from their mother's territory than young females. Once the family group has split, the mother comes into heat again.

Over the past century tiger numbers have fallen dramatically, with a decreasing population trend. None of the Tiger Conservation Landscapes within the Bengal tiger range is large enough to support an effective population size of 250 individuals. Habitat losses and the extremely large-scale incidences of poaching are serious threats to the species' survival. 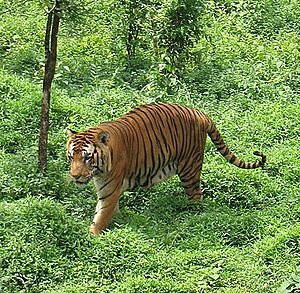 A Bengal tiger in Mangalore

The most significant immediate threat to the existence of wild tiger populations is the illegal trade in poached skins and body parts between India, Nepal and China.

Between 1994 and 2009, the Wildlife Protection Society of India has documented 893 cases of tigers killed in India, which is just a fraction of the actual poaching and trade in tiger parts during those years.

In 2006, India's Sariska Tiger Reserve lost all of its 26 tigers, mostly to poaching.

All content from Kiddle encyclopedia articles (including the article images and facts) can be freely used under Attribution-ShareAlike license, unless stated otherwise. Cite this article:
Bengal tiger Facts for Kids. Kiddle Encyclopedia.